Before going into the court, I always suggest the new players have a minimum idea about the dimension or size of the court. The size of a badminton court is 20 feet by 44 feet. The court is divided into two equal halves by a net placed at the center of the court. This creates an area of 22 feet by 20 feet at both sides of the court. 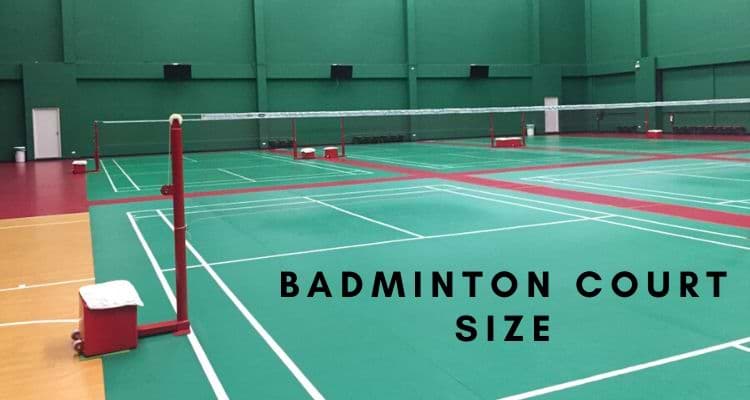 The dimension of badminton court

The total area of the badminton court

The net is that part of a badminton court, which divides the court into two equal halves. The net is placed at the center of the court, and there are net line marks at the middle of the court for placing the net in perfect position. The net creates two areas of 22 feet by 20 feet inside the court.

The net should not be thicker more than 20 mm. The regulation range of the thickness of the net is from 15 mm to 20 mm. The badminton net's width must be 6.1 meters, and the depth should be around 760 mm. As the color of the boundary marks is white or yellow, it's better to have a net, which mesh color is dark. The net should be made up of fine cord for a better experience.

This is the end line of the badminton court. There are two baselines at the end of each side of the court. The baseline is marked parallel to both ends of the net. You can measure the overall width of the badminton court by the length of the baseline.
Centerline: It is the line that divides the court from the short service line to the back boundary line. The line is perpendicular to the net and separates the left and right service court boxes.

Short service line is the nearest line that is marked parallel to the net. This line covers the width of the badminton court both in a singles match.

Doubles long service line is the line that designates the back service for the doubles matches. This line is similar in one aspect to the short service line, as it also covers the court's width.

This line covers the external boundary lines along with the baseline. It is marked 2.5 feet inside the back boundary line.

It is the area that is formed between the doubles and singles sideline. In a singles match, it is regarded as the outer of the boundaries.

You will basically find four types of surfaces for badminton court. The most common surface that is used in the court is a synthetic surface, which is built with PVC or PU. Then with a higher maintenance cost, the second most used surface is a wooden surface. You will also find a surface known as the acrylic surface, which is very similar to synthetic surfaces. And for outdoor recreational badminton, a concrete type surface is used known as cement surface.