With 9 players on the field for each team baseball game is played. The field of a baseball game is diamond-shaped and there are three main categories of a player standing on the fields. These are core position, infield, and outfield. And overall, there are 9 positions in baseball. Except these nine players there are reserve players in the dugout for substations. 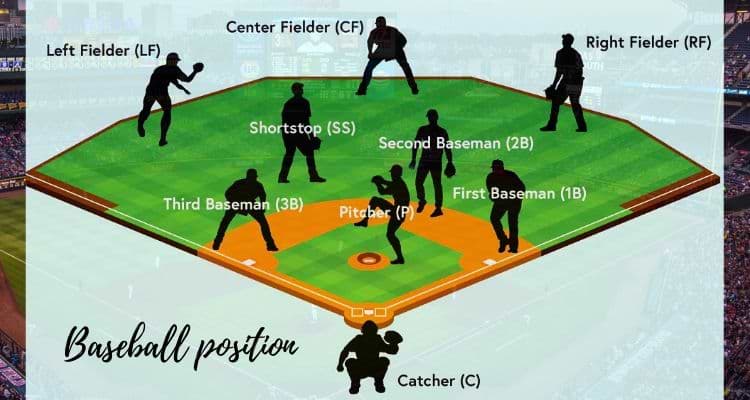 These are the nine positions on the field that the players stand, and the baseball is game is started. These field positions are very vital for having a good game of baseball. The field position is mainly divided into three categories, core position, infield, and outfield. These three main positions include the other positions in the field.

Overall, there are 9 positions in a diamond-shaped baseball field for the players. Now let's discuss the nine positions of the players in detail.

If you ask me who the most important defensive player in the field is? I would say pitcher without any doubt. The player who pitches or throws the ball towards the catcher with a goal of striking out the batter is known as a pitcher. There are two types of a pitcher, starting pitcher and relieve pitcher. Starting pitchers starts the game by throwing the baseball and the relive pitches come after the first pitch to provide relief to the starting pitcher.

He is the man who stands behind the home plate and the batter and receives the pitches from the pitcher. The catcher plays a very important role in encouraging and by giving suggestions to the pitcher where to pitch the ball. But the catcher needs to have some qualities to stand in this vital position like quicker feet and hand movements. Catchers are typically right-handed, and they have strong throwing arms, which is very helpful for the team.

The first baseman stands just behind the baseline and into fair territory from the first baseline. They are considered one of the most powerful players with powerful hitting arms in the team. They are good at hitting the ball. They also need to be good at catching and collecting the ball as they have the role of being a receiver of throws. So with strong arms they need to possess the ability to catch.

They cover the mid of the whole field by standing between the first and second bases. Like catchers they are also typically right-handed. They can play their own game with a bit relax than the other players. They also don't need to have strong arms as they throw the ball towards the first base. But still they are vital to play the anchor role in the middle of the field.

Talking about another power hitter like the first baseman the name crosses through my mind is third baseman. They are the guys who need to be very agile in the field. Their arms need to be strong enough as they have to through the balls to long distances. The players in this position need to have the ability to react as fast as possible.

The shortstop is the main position of the infield. The players play between the second and third bases. In case of any kind strategy they are the main characters on the field to connect with the outfield. They need to have strong arms to make long distances throw. They are mainly right-handed. They have to retire a runner by stopping him and then also need to have the capacity to stand on his own. That’s why he needs to be agile.

This is the position where the standing player typically has the weakest arms in the field. This is because they don't need to through the ball to a long distance, and they have to don't have to do much with the ball. They stand far away from the home plate. So you can try your power hitter to stand there in order to provide some relaxation.

These players need to be one of the fastest players in the field as they have to cover a long area in the field. They are regarded as the most vital player in the outfield section with the most catching chances. Like most of the players center players also need to have strong arms. Another important quality they need to have is the speed as they have to cover a lot of areas.

Due to providing the longest throws in the outfield section unlike left fielder they need to have the strongest arms in the outfield area. Though they see the ball less amount of time but they still need to cover a lot of ground. So they have to be very agile with strong arms and good speed.

So there are 9 positions in a baseball field for the players and hopefully, after reading this article, you have no further confusion about these positions.