It’s tough to give any direct answer to the question of why basketball is better than soccer. The popularity of the sport, fewer violations, less duration, more scorings, shorter space are some of the crucial factors that make basketball a better game than soccer.

However, as there are different tastes of sports lovers and they have their own choice, not everyone is supposed to agree with the factors. Still, throughout this article, we will go through every possible aspect of these two sports and find out why basketball is better than soccer. 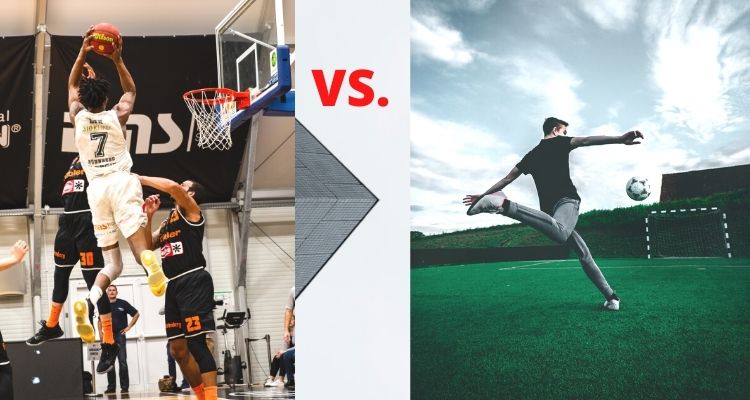 Reasons why basketball is better than soccer

Both soccer and basketball are best in their own fields and to their fan base. But have you ever wonder about the reasons that make basketball a better sport than soccer even though soccer is a universal sport.

The intensity of the game: Both these sports require restless performance from the players. They have to run throughout the court or field all the time, but there’s a slight difference noticeable between these two sports. In basketball, each of the five players has to keep moving whether they are attacking or defending.

On the contrary, while defending, the strikers get a bit of time to relax in their spots in soccer. However, the time isn’t much at all. Still for this intensity, basketball wins stay above soccer.

More games in a season: If you look closely at the popular leagues of a soccer season and NBA of basketball, you will understand the difference in-game numbers. An NBA season consists of more than double games compared to the most popular leagues of soccer.

Duration of the game: The minimum duration to finish a soccer game is 90 minutes, whereas a basketball game takes only 48 minutes to come to an end. The basketball less duration makes the game more enjoyable.

Ease of scoring: It is admitted by most sports lovers that more scoring enhances the gaming fun and this takes the basketball game one step up from soccer.

Fouls and getting injured: It is a common thing to have fouls by players in a soccer game, which number is minimal in basketball. While this sliding or tackles, the players creates more chances of getting themselves injured.

Competition in leagues: Basketball is a more unpredictable sport than soccer in terms of league titles. If you are a soccer lover, you may get a good idea about the winner of LaLiga, English premier league, Bundesliga, Serie-A, Ligue 1 at the beginning of the season.

And if you are supportive of the top-class teams in these leagues, you are lucky then. But NBA fans are not that lucky in this manner.

If you want to more fun with kind in your backyard you can chose perfect basketball hoops- portable, in ground.

In terms of popularity, basketball is lagging behind soccer and the main reason behind this is the universality of soccer. Some basic reasons make soccer more popular than basketball.

Universality: Soccer is not a US-based sport; rather it is a universal sport that is played all over the world. More than 200 countries to soccer and the huge fan base of this game make it the world’s most popular sport. However, in terms of popularity, basketball stands in the third position.

It is a US-based sport and is only played in a few other countries. Even though it’s not a universal sport, the popularity of the game is praiseworthy.

The dominance of more countries: The majority of nations on the world map are connected to soccer sports and there isn’t any dominance of one or two countries here. However, being an American sport, basketball has always American dominance.

Hard to score: Where you can see floods of score in a basketball game up to 100, a football game could end scoreless. This hard fighting scoring enhances the excitement between fans and also the popularity.

Background of soccer and basketball

Both soccer and basketball have started their journeys back in the 1900s. They have earned a lot of popularity throughout their journey.

Background of soccer: According to historians, the soccer-like sport was played more than 4,000 years ago in ancient China, Greece, parts of Central America, and so on. However, modern soccer was invented in 1863 in London, England. The first football association was formed and created universal rules for the players.

Background of basketball: The US-based sports basketball started its journey back in 1891, and the inventor of this sport was James Naismith. He was the instructor of physical education at Springfield College, Springfield, Massachusetts.

Basketball vs. soccer which is harder

Who earns more basketball or soccer?

On average, a basketball player earns more than a soccer player in terms of a full season. Having less number of players and playing more games in a whole season are the two main reasons behind this earning. A basketball team enters the field with less than half the number of players compared to a soccer team.

And in a particular season, the NBA team plays more than double games that constantly increase the number of earnings by the players.

As I already said, soccer players have to cross a larger field throughout the game compared to basketball players.

Both basketball and soccer balls are round-shaped, but there lies a huge difference in the design, construction, and also color.

Although basketball seems a better sport than soccer, soccer also has some aspects making them better in other ways. However, it depends up to you on which of these sports you find much delight.