Do you want to show some magical moves like Hermione Granger, a remarkable character from the Harry Potter movie series? Well, if you are not a magician, you won't be able to show the magic. However, you can bring the same feeling by holding a wand in your hand.

Grab it and flick it to turn on the light of the wand. Flick it again to turn the light off; isn't it amazing? In Hermione Granger Wand reviews 2021, I've included the top seven wands and presented a detailed description of all these items. You will not regret it if you continue the article till the end.

The magical stick Hermione granger used in the series of harry potter movies is known as Hermione granger wand. The wand was made of vine wood and measured 10.75 inches in length. She showed her superior power when she was staying in Hogwarts. She used the wand in her hand and that proved she had something exceptional inside her and the wand is her strength. Thus Hermione granger's wand became famous. 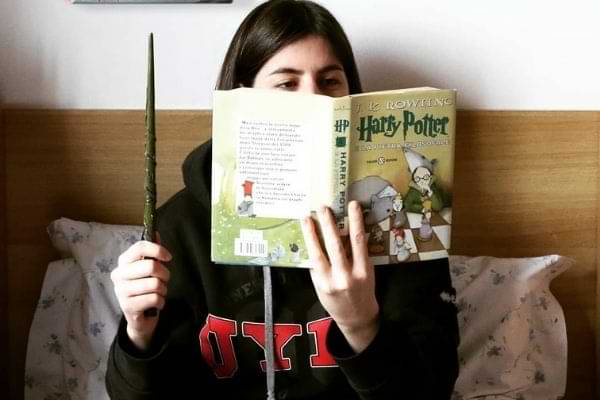 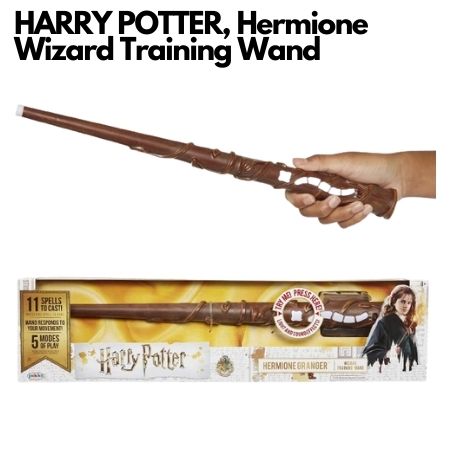 Grab this wizard training wand from HARRY POTTER and let your kids train like a wizard. The wand is fifteen inches or 38 cm long approximately. You can play in a single game or with friends as there are five different modes included in the wands for enhanced fun. You have to collect other wands like Harry Potter's wand, Elder wand and Voldemort's wand for multi wand gaming. In a single or standalone game, there are two game modes, spell training and free play. The kids will learn eleven spells and improve their skills.

In free play, cast the spells you've learned and test your skills. However, in the multi-wand mode, you can play three game modes, spell practice, training spells and wizard tag. You must have two wands to participate in these game modes. You will find a light-up button that allows you to select which mode to play. There are eleven different spells included for the kids: locomotor, alohomora, finite incantatem, wingardium leviosa, incendio, revelio, Ventus, meteolojinx, arresto momentum, mimblewimble and tarantallegra.

Suppose you want to have the wand packed in a nicely designed box. I would love to suggest this wand from The Noble Collection. It measures 15 inches in length approximately. It is an authentic recreation of Hermione's wand and it comes with a replica of the original Ollivanders wand box. The beautiful outlook of the box lets you use it as a decorative thing.

The box comes with a dark green finish on the top and it is entirely plain designed. You will find tattoos designed on both width sides of the box. When you open the box, you will be sure that it is made of cardboard with a cover of paper and the manufacturer has left no extra edges on the box. In the second part, or where the wand is kept, you will see a red ribbon surrounding it. Besides, there is a foam used inside the box to place the wand securely and nicely. 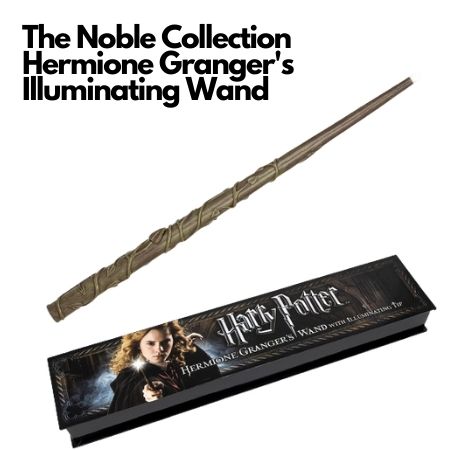 Grab this wand from The Noble Collection and wave it to turn the illuminating light on. But how to turn it off! Well, it's pretty simple, too, by waving the wand again. This wand measures 15 inches in length approximately. Let your kids have the like Hermione Granger after holding the wand. It is beautifully designed with the branches and leaves on the bottom part. To make the wand illuminate light or perform in the way you want, you will need to use two AAA batteries.

However, the batteries are not included in the set, so you have to buy them individually. There is a key included in the box, which will let you open the small lid from the bottom to insert the batteries or bring them outside. You will find a button on the side of the wand, which is used to increase or decrease the light intensity. That means you can gradually increase or decrease the light after turning it on by flicking.

If you are looking to surprise your kid at the next birthday party with a gorgeous gift, then you can choose the replica of Hermione Granger's wand. Unlike most other wands, it is not made of plastic or resin. The manufacturer has used real wood to construct this magic wand and create a realistic feel inside the user when he/she holds it. The wand measures 15 inches or 38 cm in length approximately.

Alivan's doesn't bring this wooden wand in a single piece to you guys; there is something more for you. With the wand, you will get a velvet bag and a certificate. Meanwhile, if you want to just use the wand for decoration, you are welcome because it comes in a lovely blue box. Harry Potter lovers will also love the carved design of this real wooden wand. 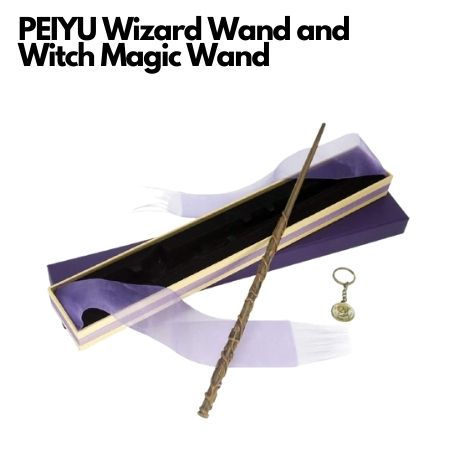 PEIYU has come with this brown color wand that can be an excellent choice for gifting your kids at birthday parties. The wand is a cosplay wand and is made out of resin and steel core inside. As you let your kids play and have fun with this wand, you need to ensure safety before handing it over. And PEIYU ensures the wand's safety as it is made of non-toxic materials, it is tasteless and designed with excellent craftsmanship.

As it is made of a strong steel core inside, it is tough to break or bent. The wand comes in a lovely purple color gift box and there is a medal included in it. The box comes with an elegant design and is made of cardboard with a cover of paper. The wand is well protected inside the box as there is foam designed on both sides of the wand. It measures around 15.6 inches in length.

The lovers of the harry potter movie series should look once at Rubie's wand, which is made of following the wand used by Hermione Granger in the movie. You can use the wand as a part of a Halloween party costume or use it as a present for your kids at the next birthday party. The wand is 13 inches in length, which is slightly shorter in size than most other available wands in the market.

It is made of molded plastic and you are going to find it in various colors. It is specially designed for the boys and anyone over six months can easily handle the wand. Rubie's brings you official Hogwarts robes and ties. You can arrange any party in your backyard and make it part of the party, if you have ever loved watching the harry potter movie series.

Do you want to collect the re-creation of Hermione Granger's used wand in the harry potter movies? Then purchase this wand from Universal Studios. It is made of hard resin and measures around 14 inches, which a little bit shorter than most other wands available in the market. However, the size is perfect for the kids. It comes with Ollivander's wand box, which is nicely designed and brown.

The box is made of cardboard and there is a wrapping of brown color paper over it. After opening the box, you will find the wand situated in the middle of the foam. The manufacturer has used foam for a secured placement of the wand inside. Moreover, it comes with a double-sided spell map that includes all the places where you can use the wand.

It's not just selecting a wand and purchasing it. If you want some gorgeous look and excellent fun, you need to choose the item after being assured it has all the qualities you want.

The wand Hermione seems to use in harry potter movies were made of vine wood. However, this wand's replica is made of high-quality wood, steel, plastic or resin. You can also make a wand of paper in your home.

You are not buying Hermione's wand to play with it; instead, you are buying it for your kids. So if the wand is not lightweight enough, it will become hard for the kids to handle it. The wand's weight varies depending on the type of materials used to construct it and the length of the wand. You will find wands that weigh less than 5 ounces and even wands that weigh more than 10 ounces.

With or without light

This is the most exciting side of a wand, the illuminating light. Some guys are satisfied with just handling the wand, but guys like me are not satisfied until turning on the illuminating light on. If you have bought a wand with this feature, you just need to flick it once to turn on the light and flick again to turn it off. In most cases, you will find a hidden button on the wand to increase and decrease the light's intensity.

Batteries included or not

You need batteries for your wand if it has light. Most of such wands require two AAA batteries. Instead of buying these batteries individually, you should look for a wand that is equipped with batteries.

Things like a nice colorful box, different spells or spell maps are great for a harry potter fan. If you want to show it off at a party or such type of function, you need to consider the product's outlook. I Know you are fan of harry potter Lego castles, play with your family member with kids.

How to make Hermione Granger wand

You can make a wand-like Hermione granger's (video) one on your own by following the steps given below.

The wand Hermione Granger held in her hand in the harry potter movie series was 10.75 inches long. It was made of vine wood and had a dragon heartstring core. The most replicas we see nowadays measure around 15 inches. However, some manufacturers also design 12 to 14 inches wands.

I think there is probably there are no kids you will find that don't love magic. And if you gift them a magical stick or specifically Hermione granger's wand on his/her birthday, that will be awesome. Then why are you still making a delay in choosing from the list?