If you like the dominos game, you must try the Mexican train game. This is the best dominos game admitted by the experts and it will provide both kids and adults a great fun time with the family. Attach dominos to create a train and use all of your tiles first to become the winner.

Spin Master Mexican Train Dominoes Game in Aluminum Carry Case is my first recommendation for buying a Mexican train game set and it is placed on top of the list of best Mexican train game set reviews. If you want to know what equipments you need the game set to have and also the gameplay rules then continue reading the article. 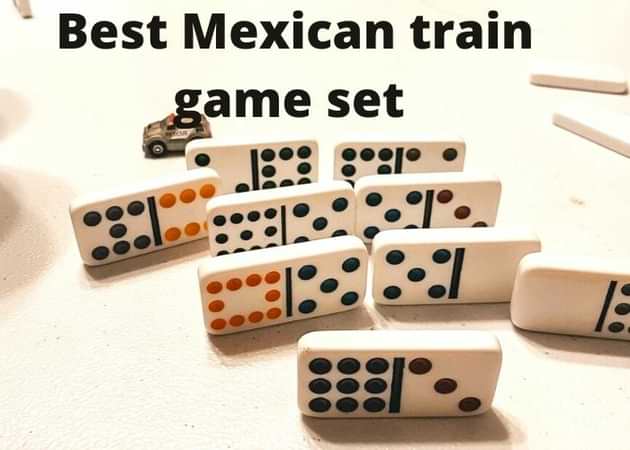 Number of dominoes used in a Mexican train game

Sometimes players seem to get confused before starting the game in distributing the dominoes or tiles among the participants. What number of tiles each participant will receive depends on the number of participants.

The remaining dominoes after distributing to each player will stay on one side of the table and they will be called boneyard.

Build your train with the dominoes pieces and have a great family fun time. This Mexican train game set comes with 91 double-12 dominoes. The game set also allows you to play double 6 or double 9 game versions for quick enjoyment. There are 9 trains included in the game set as well.

You will find score pads in the game set that are used to keep the scoring tracks running. The dominoes pieces and the trains are made of plastic. The game is playable between 2 to 8 players and according to the manufacturer, anyone over 8 years is allowed to play the game.

The game can be played for a single round as well as for 12 rounds. It also includes a sturdy; aluminum-constructed carrying case that allows safely storing the playing equipment and taking them on the go if you want. The easy-to-read instruction helps the participants understand the basics of the game easily.

The game set from Regal Games comes with a total of 136 dominoes pieces, which allows the players to play the game for 15 rounds. Every tile included in the set is designed with colored dots. There is a wooden hub in the game set, which is placed in the middle of the board at the starting of the game.

The game set also includes 8 metal train pieces, which you have to use when you can’t place a tile on your turn. The color paints used to design the dots on the domino pieces are non-toxic and eco-friendly. So don’t worry to let kids play the game.

There is a collector tin included in the game set that offers you to store the game pieces securely in there and it also lets you carry the whole game set with you if you like. According to the manufacturer, the game is eligible for 8 years or up and 2 to 8 players can participate at a time in the gameplay.

This is two in one dominos game set from CHH that includes a Mexican train set as well as a chicken domino set. It comes with 136 double-15 tiles. Unlike the first two products I have mentioned, the tiles of this game set are designed with colored numbers on the surface.

Except for the domino pieces, it also has eight plastic train markers and two chicken markers. The plastic train markers are used to show the open train building area also the start of making Mexican trains. There is also a plastic hub included in the game set, which you have to place in the middle of the board to place set the opening tile.

There is a strong, robust aluminum case included in the set. This aluminum case makes it superbly easy for you to store the gameplay equipment inside and keep them secure while you are not playing. According to the manufacturer, kids of 8 years or above are allowed to play the game.

Now you can enjoy the double 12 dominos game with this Mexican train game set from KAILE. The game set comes with a total of 91 double-12 domino tiles. The tiles are made of safe and harmless melamine. The manufacturer has used non-toxic and eco-friendly paint colors to draw the numbers on the tiles.

The aluminum carrying case turns out to be a basic need for such game sets as it allows you to store the small game pieces securely inside. If you want to take the game set with you, you can do so nicely with the carrying case. It is a 2 to 8 player game and it is recommended for 8 years or up kids. 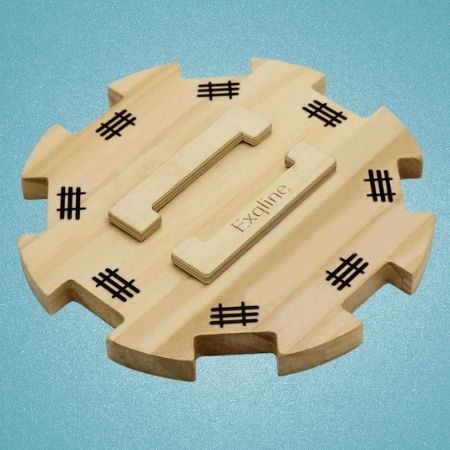 Setup this wooden hub from Exqline for the Mexican train game in the middle of the board, before you are ready to go in the game. The hub is made of superior pine wood and it is well constructed. It is a tough and dense hub, which also provides you a smoother feel.

Moreover, the manufacturer has used soft non-woven cloth at the bottom of the hub with a light coating of lacquer. It comes with a flat foundation for the Mexican train centerpieces. Then they used two pieces of wood on the main body to form the top slot. This construction ensures that the tiles and the train markers will stay well on the hub.

The hub is a perfect choice for professional size domino pieces. However, the extra room in the slots also allows a few large tiles to settle down nicely. You will find eight slots around the center tile slot on the hub to place eight trains and that’s why it is a suitable one for eight players game. 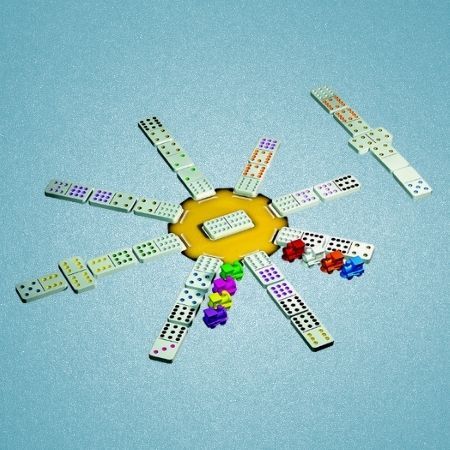 Play the world’s most famous domino game with this Mexican train game set from Tactic Games US. The game set is equipped with 91 nicely designed dot tiles. The tiles have colorful dots designed on the top surface. The color used to paint is non-toxic and safe for kids.

The game is playable between eight players and there are eight colorful train pieces included in the game set. There is also a station hub, which is placed in the middle of the board before starting the game.

However, the game set also comes with a robust tin to keep the playing equipment securely in one place. To win the game, you need to use all the domino pieces or tiles first anyone does.

This Mexican train game set from Fundex Games comes with a high-quality hub that has a built-in speaker. During the game, when you press the button, it will toot and chug. This feature provides the kids amazing fun time.

The game set includes a total of 91 double-12 domino tiles. There are also nine mini-train pieces included in the game set. The tiles are designed with colorful dots and there is enough room on the hub for placing the opening tile.

There is a specially shaped tin carriage include in the game set that provides convenient storing of the game pieces when they are not in use. If you want to have the sound from the hub, you have to insert batteries in this. The gameplay instruction will help the kids to understand the basics of the game easily.

You should never miss

Buying a game set without having the required equipment is never a wise decision. In the same way, you need to buy a complete Mexican train game set and this buying guide will be helpful for this.

The dominoes are also known as tiles, domino pieces in the game. Typically, there are two quantities of dominos a game set includes, 136 and 91. The first one allows 15 rounds of the game and the second one allows 12 rounds of the game. These dominoes can be designed in two ways, with colored dots, and with colored numberings. Mostly they are made of plastic, although some manufacturer uses melamine for this.

Not every game set includes a hub, but some sets do. At the starting of the game, this hub is set in the middle of the table. It is a good one for placing the opening tile in the right place. It is

This is an important addition to the game set as it helps the younger players even the adults to know more in-depth details about playing the game. The detailed instruction will make you understand the game rules easily.

How to play Mexican train game

If you have bought a complete Mexican train game set, then it is not a difficult game to play on.

Why it is called the Mexican train game

The object of this game is to get rid of all the dominos before the other participants and win the game. Meanwhile, the players build an extra train during the gameplay along with their own trains, which is known as the Mexican train (wikipedia). Again, some modern game versions have built-in Mexican train sounds like toot and chug. That’s why; the game is called the Mexican train game.

There are some strategies you can follow to play and win the Mexican train game successfully.

Dominos games are always a good source of fun for the kids and they will definitely love to play Mexican train games. The game sets I have mentioned are worth consideration as they are a complete game set.