Are you tired of playing competitive games? Well, you are and that’s why you are here to look for some pandemic board games. Now it’s the perfect time to gather your army and work together to save the world by finding the cures of several fatal diseases.

The list of pandemic board games begins with Pandemic from Z-Man Games. You need to co-operate with the other players to save humanity from the pandemic. You will find a buying guide and playing rules as you continue reading the article further. 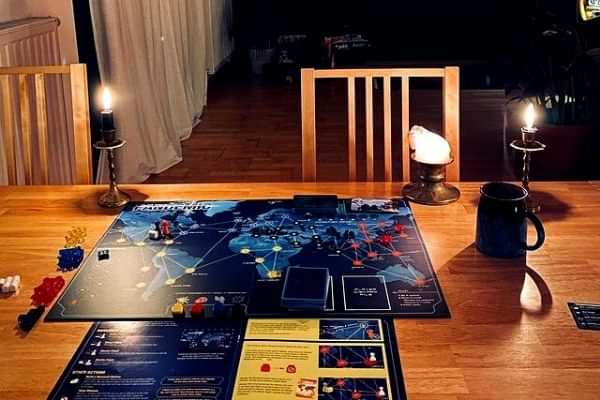 Z-Man Games has made this pandemic game set, which is perfect for two to four players. The materials of the game are made of paper. You will find four diseases have broken out in the world and you guys are going to team up as some specialist to find the cures of these fatal diseases. And you have to do this before they spread all around the world and create a pandemic.

The game set comes with all the needed components of the game. There are city cards that let you travel around the world to find the cure of the diseases. You will find player cards and city cards included in the game set. A player can take advantage cards to show their special abilities while searching for the cure of these diseases.

Do you love twist? If you do, then grab this pandemic game set from Z-Man Games that comes with an epic twist on the now-classic pandemic instructions. The game set is made for two to four players’ participation. It takes a bit more time to end the game than the original version as it runs for approximately 60 minutes.

The game begins as an original pandemic but soon morphs into something more. The characters of this game are affected by the experiences of battling the global pandemic situation during their search for cures. Even the diseases of the pandemic themselves evolve as you play. According to the manufacturer, anyone over 13 years or up is allowed to play the game.

3. Pandemic: On the Brink

Work as a team and try finding out the cure for all diseases to save cities and the world from the upcoming pandemic. Unlike the classic or original version, you are going to get many new challenges during the gameplay. Here you can make the team consisting of an extra player.

Including a fifth player also adds a twist in the game. That fifth guy can work as a bio-terrorist and instead of curing the disease, he can spread it intentionally. There are Petri pieces that make the game livelier. However, the new roles and event cards add more variety to the game.

Grab this standalone pandemic adventure game from Z-Man Games. Two to four players can participate in the game and they will work as humanity’s last hope against a threat from other dimensions. In the gameplay, the old ones will be stirring within their cosmic prison and rising anyhow will create a disaster situation in the world.

The players participating in the game will take the role of the investigators and work together to close four gates to other dimensions. The game runs for approximately 40 minutes. You can travel from different towns to the Cthulhu mythos. Remember, in the gameplay you guys are the only thing standing in the way of falling of humanity.

Setup this expanded version of the original pandemic game and enhance the complexities of the game. Z-Man Games has included new roles, events and scenarios in the expansion. In the gameplay, new medical technologies have been developed to stop infectious diseases spreading all over the world.

Here the task of this game is to travel around the board collecting samples of each disease in the field. As the name indicates, there is a role of the lab in the game. The participants will bring the samples in the lab to sequence, characterize and test your credits. After collecting the samples, seal you behind the bio-hazard doors.

Z-Man Games has made a second season of the legacy pandemic game. The game is playable between two to four players and it runs for sixty minutes around. In the game, the world has been ravaged by one virulent plague and humanity’s survival is hanging in the balance.

Players participating in the game have some responsibilities on their shoulder to supply the last need to the people and unravel the mysteries of the plague. Your efforts in the game will carry you past the edge of the known world.

Three formidable challenges are waiting for you in the game set and Z-Man Games have made your task of saving the world a bit more complicated. In the game, the diseases are spreading from animals to humans. It is a two to four-player game and it runs for 45 minutes approximately.

The game set comes with new roles, events and new disease to the pandemic. Allows only players of 13 years or more to participate in the game and work together to save the world. It is not a standalone expansion game set and you need a pandemic game set to play this game.

It was 1848 and during the pandemic, in Iberia, several diseases are spreading at a fast speed. Z-Man Games has built this game board with such a story. In the game, the players will work as a nurse, a railwayman and a rural doctor.

What is Pandemic board game

Pandemic is a co-operative board game, which playable between two to four players typically. However, there are several versions of the game that allows a minimum of one and a maximum of six players to participate. In the game, four deadly diseases have been shown and the task of the players participating in the game is to cure all these four diseases before they turn into pandemics.

A player might take one out of seven possible roles and work in a combined way to cure these diseases in different regions of the world. The seven roles are dispatcher, medic, scientist, researcher, operations expert, contingency planner and quarantine specialist. The game typically runs for an hour, including the setup time. You must work co-operatively in your selected roles with others and invent the cure of the diseases before the pandemic breaks out.

Buy a complete pandemic board game set and have the great fun of the game. Here I’m to help you in this regard and make the buying process a lot easier.

How to play the pandemic board game

Knowing the rules of a new game is a must. And the pandemic board is not an easy game to play. Hey, I’ve no intention of frightening you. But read the basic game rules (youtube video) for a better experience of the game.

There is no doubt that pandemic is an excellent co-operative strategic game. You guys can collect one of these game sets from the listed products and enjoy the game. Watch out the buying guide section of the course and also gaming rules.