Do you think these three games are almost a similar type of game? Yes, it seems that these games are very much similar to each other, but they are different in many ways also. And that's the topic of this article. 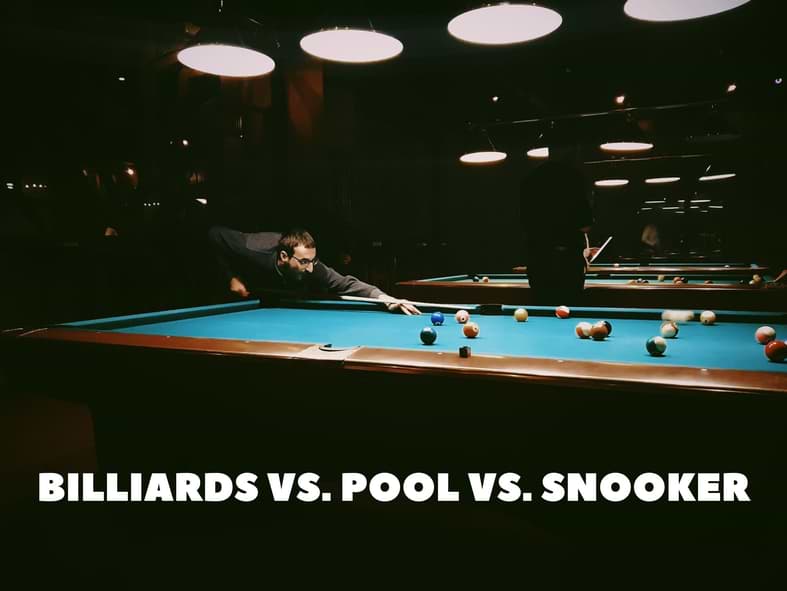 BILLIARDS VS. POOL VS. SNOOKER

This game can be said as the boss of the other two games. Because following the rules, equipments, playing methods of billiards the other two games were invented. But they are not the same as billiards. Billiards is a game that is played with a cue stick on a cloth-covered table. The table includes no pockets. Limited numbers of balls are placed on the table.

The players of the game have to hit the balls with the help of the cue stick. You might notice that this game is also called as "cue sports". The original name of billiards is "carom billiards". This game can be played between two players or two teams.

Basically, this game is derived from Billiards. But it differs from billiards too. You know there is no use of pockets in a billiards table. But the poll table has six pockets. Are you thinking about how it is possible to have six pockets in a table? I will give you the idea of where the pockets are in the next part of the article when I discuss the differences between tables of these three games.

This game is much different from the above mentioned two games. Well, you will get pockets in the table of snooker like the pool game, but here the main purpose is to score or pocket more balls to win the game. We don't find any such rules in billiards or pool games.

In the snooker game, the most number of balls are used. 22 balls with a cue ball are included in the game. Another thing that makes this game a bit difficult for the players is that, the pockets designed in the table are smaller than the pool game. And the cue stick is also smaller than billiards or pool sticks. So you have to pocket the maximum number of balls in the pocket and do so with difficulties.

The main fact that distinguishes these three games is the size of the tables. There are some other minor facts that also make these three games differ from each other. Now I'm going to discuss the facts below.

These three almost similar looked games use different sizes of tables in their games. Billiard tables typically come with a size of 9.3 feet by 4.7 feet. But if you are in the USA, then you can also find tables measuring 10 feet by 5 feet.

In the case of the pool table, the size is a complex matter. You will find various sizes of pool tables. The size basically ranges from 7 feet to 9 feet. But sometimes you will see a pool table of 10 feet or 6 feet also. So the size of pool tables varies a lot depending on the type of the game and you know the maximum pool table are green.

The snooker tables are a bit larger than pool or billiards table as it measures 12 feet by 6 feet. But this size is valid for the Europeans because, in the USA, the size of a snooker table is 10 feet by 5 feet.

In billiards, there is no pocket in the table. But the pool table has six holes or pockets. As usual, it has four pockets in the four corners of the table and the other two pockets are designed right in the middle of both lengthy parts of the table. Snooker tables have the same number of pockets as the pool tables.

Different numbers of ball are used in these three games. In billiards, there are three balls used in three different colors. Yellow and white balls are cue balls for each team or player. The reaming ball is in red color and it is known as the object ball.

In pool, 15 balls are used with a cue ball in extra, which are a bit smaller in size than the balls used in billiards. Among these 15 balls, 7 are striped and 7 are solid. The remaining ball is black.

The most number of balls are used in snooker game with 22 balls. There are 15 red balls, one ball in yellow, green, brown, blue, pink, black and white color. The white ball is the cue ball.

So I can assure that if you can find out these differences than you will be able to distinguish the differences among billiards, pool and snooker games.