The player standing on the back row digging the ball continuously and not letting the opponent scoring a point wears a different colored jersey in volleyball. The player who wears this jersey is known as Libero. This position is one of the latest induction in volleyball.

The position is very vital in a volleyball game as he ruins the scoring chances of the opposition. He is not allowed to go in the court's front position and attack or block the ball. Typically to differentiate this special position easily, a libero puts on a different jersey. 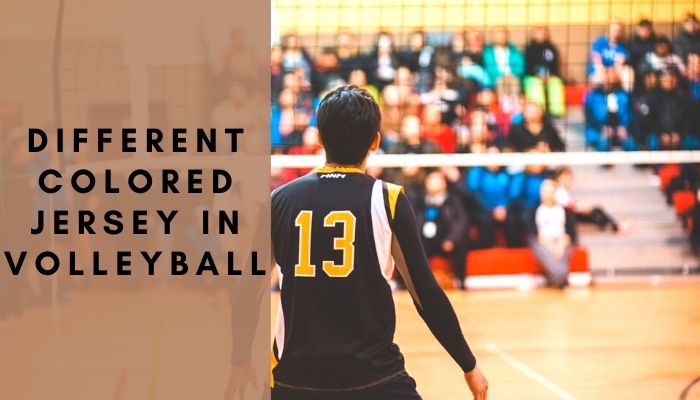 What do the different colored jerseys mean in volleyball

Through the term different color jerseys in volleyball, it means the specialized one to differentiate a special. The position which requires a different colored jersey is the Libero. From the other five teammates, a libero wears a completely different jersey throughout the game.

It doesn’t matter, even if he is to be substituted the newly coming Libero will also wear the same jersey. It makes the match officials easily identify this position and not interfere while the substitution is made. There isn’t any definite rule regarding the substitution of Libero in volleyball.

Who wears a different color jersey in volleyball?

There are six players on a volleyball team, and six of them have their own position. Except for one player, the other five puts on the same colored jersey during the game. The one wearing a different colored jersey is called Libero.

Libero is a defensive player in volleyball, and his position is regarded as the most important one as well. For this reason, they are considered defensive specialists. The word libero means free in Italian, and one has to admit the freedom given to this player.

A libero is typically shorter than front players standing near the net. The shorter height allows him a good reach to the ball while digging before it hits the ground.

A libero cover and digs the ball allowing the other players to score some points. It is a defensive position, and from this he passes the ball to the setter and hitter to find a better hit on the other side of the net.

The players playing at the position must be agile and possess enough speed to cover the back of the row. Unlike the other teammates, a libero can be substituted as many times as it requires. And because of using a unique jersey, the match official doesn't interfere, or no necessary permission is required.

Although it’s the most important position in volleyball and the victory depends a lot on the performance of the players in this position, he still can’t do everything. As Libero is in a defensive position, he can never turn himself offensive.

Liberos are not allowed to go near the net area to hit or block the ball. Even a libero can’t take a ball within three meters area from the net. Though he stands on the back row, he can’t serve because his position only allows him to save the ball from touching the ground.

Another major don’t that a libero has is that he can’t be the captain of the team. A captain has to remain all the time in the court, but a libero is always changed. So selecting the team captain from this position isn’t a wise thing.

The main reason behind using different jerseys in volleyball is to identify the most important position of the game simply. Libero in both participating sides is considered the saving and specialized position in volleyball. Standing on the back row, they prevent opponents' hits from touching the ground.

A libero can get substitutions as many times as he needs. But the other positions, players can’t get an infinite substitution. To make the substitution interruption-free and not to seek permission from the match referee, Libero wears different jerseys. It makes the player unique and specialized ones in the court.

Smaller athletes are chosen for this position. The taller ones remain on the middle half and also near the net. And because of the volleyball net height and powerful shots, it becomes tougher for the regular taller players to reach the digging position quickly. However, a libero with a shorter height does the job pretty well.

Why does a libero wear a different color jersey?

To let the match officials and the opponent teammates easily recognize the specialist in the back row position, Libero wears a different color jersey. It keeps them different from their teammates. A libero stands on the back row and gives every possible effort to stop the ball from hitting the ground.

He is a free player in the court who can get substitutions at any time of the game without waiting for definite times like the others. They also don’t require any permission for the substitution process because the official easily recognizes the Libero with the different jersey color.

The substitute ones on the bench are also suggested to wear a similar libero jersey, which allows them to easily enter the court during substitution without wasting any time.

How many different positions are there is volleyball

A volleyball team must have six players on the field before the game gets started, and each player has one definite position in the field.

Setter: He is the vocal leader of the team and sets the ball for the teammates letting them score points. He typically runs to the offense and also digs, blocks the ball to the defense.

Outside hitter: He is the primary passer and can play in both offensive and defensive spots. He also calls out the hitter and works with the middle blocker to block the ball sometimes.

Opposite hitter: He can dig quick attacks from the opponent. He also works as a backup setter in the game and also works with middle blockers on blocking.

Middle blocker: The main task of this position is to block the opponent’s shots. He works as a quick attacker towards the offensive side.

Libero: He is the main support on the back row and is mainly used to dig the opponent’s shot preventing them from scoring. He also acts as a setter sometimes if the setter is missing.

Defensive specialist: He is back row hitter, but unlike liberos, he can also play on the front row if required.

There are mainly two colors of jerseys seen in each volleyball team on the court. Of the six players, five players wear similar jerseys, and the Libero wears a different jersey. Even the substitute liberos also put on the same jersey as the player wearing inside the court.

The volleyball captain wears a similar jersey as the other four teammates, and typically his jersey number is 1. However, the jersey number doesn't remain the same in all cases. But no libero can be the captain of the team because they put on a different jersey.