According to the International Volleyball Federation or FIVB, the regulation size of a volleyball court is 59 feet or 18 meters long and 29.5 feet or 9 meters wide. Each side of the volleyball court measures 9 meters by 9 meters square. This size of the court is applicable to both men and women players. 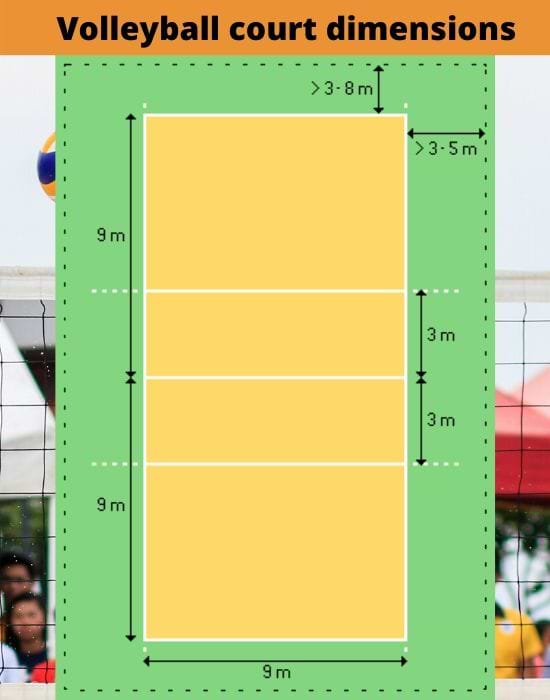 The net is one meter wide and is set up from the middle of on sideline exactly to the opposite same sideline position. Thus the length of the court is increased by the use of this one-meter wide net. The court then measures a total length of 11 meters. So the usage of this net also affects the dimension of a volleyball court.

Well, we have already come to know that a volleyball court is divided into two equal halves. But there is another division that is noticed in each part of the court. Each side or part of the court has two zones. These are attack zone or front zone and defense zone or back zone.

Players serve from the back zone position or even outside of the area. The actual service position is a 3-meter section at the right side of the backline at both ends of the court. You don't need to think that the players of the attack zone and defense zone can't change their positions. During the game, every player can change their positions according to the demand of shots. The ceiling height in the indoor volleyball court should be 23 feet minimum. The higher ceilings are always preferable in the gameplay.

But FIVB didn't demand such definite free space for the court. According to them, the free zone of the court should measure from 5 meters or 16 feet to 6 meters or 20 feet. Another thing that you need to look for the beach volleyball court is the depth of the sands inside and outside of the court. The recommended depth of the sand inside the court is 18 inches and outside the court or in free zone the depth should be 12 inches.

You will find three kinds of players in a volleyball game. They are setter, hitters and defenders. Depending on the playing characters of the players and their roles in the game there are six positions identified in the court. These positions are given below.

So a volleyball court is 59 feet or 18 meters long and 29.5 feet or 9 meters wide. And there are six positions in the court for the players.