Basketball is a popular game that is played by so many young people around the world. Playing basketball develops so many things in human life. Example: It develops the peer relationships between people, increases a person's self-esteem, develops one's leadership qualities, and helps to keep good physical health.

Now the question is how long is a basketball game lasts? A basketball game in the National Basketball Association (NBA) formed of four quarters, making the game last for 48 minutes. College basketball formed of two halves of 20 minutes of each halves, with a 40-minute game. The extent of a game change following the obstacles in the game. It takes much longer to play than the actual timing due to the noticeable obstacles in the game. Time counting is stopped when fouls, injuries, timeouts, and breaks happen in-between play periods. The actual game takes 2-3 hours to finish. 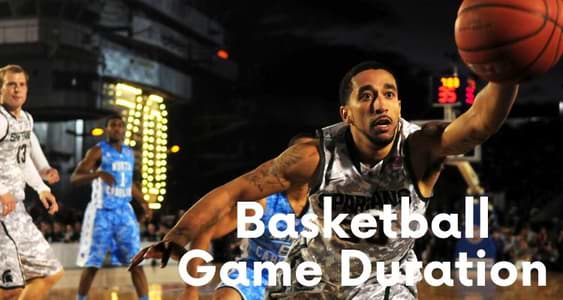 How long is a college basketball game?

College basketball is the second popular basketball form for the national basketball fans. The National Collegiate Athletic Association (NCAA) is the main supplier of college basketball. This basketball form is so popular because of the two halves system. This game goes for 40 minutes; each halves runs for 20 minutes. It has a 15 minutes half time and then 5 minutes added continuously until one team is ahead of the other.

How long is a high school basketball game?

High school basketball games are not as lengthy as other basketball games. It contains 4 quarters, each 8 minutes long. The total game is 32 minutes. There will be a 10-minute break in between 2 or 3 no. quarter and fouls, injuries, timeouts will take more time. So, the total game will take 1 ½ hour to complete. If there’s a tie between the teams 4 extra minutes will be added continuously until one team breaks the tie and wins.

How long is an NBA basketball game?

Professional NBA game has four quarters and each quarter is for 12 minutes. So, the game will be for 48 minutes. There will be a break for 15 minutes and other things like fouls, breaks, and timeout will take some extra time. So basically this game will take 2-3 hours from start to finish.

How long are the NCAA basketball games?

How long is a professional basketball game?

How long is a woman's basketball game?

Related article:  What is a triple double in Basketball

How long is the average basketball game?

International Basketball Federation (FIBA) is the global administrators of the game. Basketball is managed by them and they have complete control over this sport. As a governing manager of the game, they decide the length and duration of the game.

Basketball has its own timeframe. It has four quarters in each match. When the quarters are 12 minutes’ length you will play a game of 48 minutes and on the other hand when each quarter lasts for 10 minutes then the length of the whole match will last 40 minutes. It will take 2 hours and a half or more to watch a whole basketball match.

Now you may have the question, why a basketball game takes that long to finish when time play duration is less than one hour? In basketball, clock countdowns stop when something happens. The game calls to a pause because of fouls, breaks, injuries, and timeouts.

If you finding perfect basketball hoop for set your backyard see this post.

The teams will change sides after two quarters. There will be two minutes of the interval after each quarter including a fifteen minutes’ halftime break. Coaches can call one to five timeouts during the game.

Players get time limits on the possession of the ball with five key rules.

So, the most asked question How long is a basketball game takes a lot of word to answer because it is an interesting game. Playing basketball takes a lot of strength, energy, and mental pressure. It played by the young, a disciplined game, also takes a lot of patience but it’s an enjoyable game for both players and watchers. Though the length and duration of the game depend on the tournament. The overall time length is the same in every tournament except the foul, timeouts, breaks and other stoppages. So comparing will be a tough job. Apart from that everything is the same.