Lacrosse is a wonderful team sport in the world of sports. Like the other games in the world, lacrosse has some common characteristics that a sport needs to have. For example, having a certain duration in the game. A lacrosse game is 60 minutes long and these 60 minutes are divided into four equal quarters of 15 minutes. 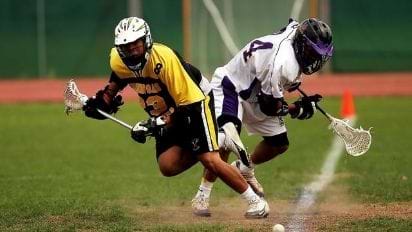 Before discussing the length of the game let’s know some information about the game. It was first invented in the 1700s in North America. But then it was played with no such rules and there was no proper time of game play.

This lacrosse game is a team sport. To play the game two equipments are fundamental. One is a lacrosse stick and the other is a ball, which is made of rubber.

While reading about any game readers must have a question in their mind that, what’s the duration of the game? Are there any variations regarding the length of the game? That’s why this article is for you. Now let’s find out the answers to your questions.

Lacrosse game is 60 minutes long in general. These 60 minutes are divided into four equal quarters of 15 minutes each quarter. There is also intermission in the game. But the duration of the game has some variations.

The variations in the duration of the game are made regarding the gender and the level of players. At first, I will give the time management of Lacrosse game according to gender.

You have already got an idea about the length of men’s and women’s lacrosse games. Now let’s talk about the differences in the game depending on the level of the players.

How long is a high school lacrosse game

In high school, this game has a duration of 48 minutes for the men players. These 48 minutes is divided into four equal quarters of 12 minutes.
But the duration of the women’s lacrosse in this level is 50 minutes, divided into two halves of 25 minutes. In the case of a tie, women players get 6 minutes of extra time whereas the men get 4 minutes.

How long is a college lacrosse game

How long is a Professional lacrosse game

This (MLL)level has the same duration as the college level. Just the difference is in the extra time. At this level, the players get 10 minutes of extra time.

It has also got the same duration like as the duration of the college level players. But at this level, the extra time given to the players is far more than the other levels, which is 15 minutes.

After reading all these we can call it a complex sport with a lot of playing versions. And hopefully, as a reader of this article, you have got your answers quite simply.