We all know that Trump has a deep passion for golf. He is playing golf for a long time and truly speaking he is a good golfer without any doubt. Many of the professionals have said that Trump is a great golfer for his basic instincts.

In recent times Golf Digest ranked trump as the best golfer among the all-time president. 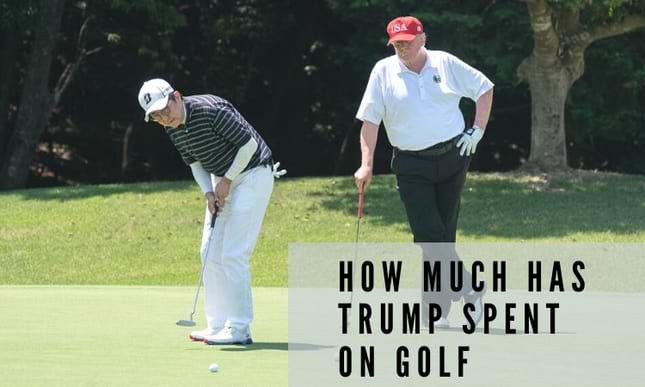 But this over attraction about golf is costing a lot of money for the taxpayers.

Donald Trump not only loves to play golf but also has many golf courses. And for visiting his courses taxpayers have to pay a lot of tax.

For visiting his courses in Florida 81 million needed to be paid.

For visiting his new jersey course 17 million needed to be paid.

For visiting Los Angeles 1 million needed to be paid.

And for visiting his Scotland golf course 3 million needed to be paid.

Trump and Obama are two different personalities and their characteristics are also different. People more often find Obama as a sensitive and good leader where else trump is arrogant and careless about duty.

Their love for golf is also different. Before electing as president trump had said that Obama spent a lot of time playing golf. now, if we compare trump with Obama then we can see that Trump had spent twice as more time than Obama playing golf.

A survey had reported that Donald Trump had taken 175 trips in his first 853 days in office .and for these 175 trips taxpayers had to pay more than 100 million.

On the other hand in this course of time, Obama had taken 70 rounds and 48 of them were at courses on military bases.

Trump has a long-lasting relationship with golf. Even before his presidency period, he used to playing golf. Though he claimed that Obama instead of managing duties were playing more golf but now it seems like he will overtake Obamas two terms rounds in one term of his presidency.

Trump has too many golf courses and he uses all of his golf courses for earning also. If you are interested about playing golf in the courses of trump then you have to pay for it.

Trump has at least 16 golf courses. Some of them trump use for his own vacation and some of them he uses for earning.all the golf courses of trumps are as follows-

These are the property that belongs to trump. Trump is mastermind businessman. He is quite arrogant about his manner.

His thought about golf is that golf is a type of game that is for the rich. You need to have a high aspiration for playing golf. His opinion defines that if you are not rich then playing golf is not your cup of tea. Instead of playing golf you just need to mind your own business.

In conclusion, we can say that Donald Trump is the type of person who is highly ambitious and who has a great attraction about golf. He has too many golf courses not because he is passionate about golf but also because he earns a lot amount of money from all those golf courses. Some of them are for private use and some of them are for public use.
Survey suggests that trump spends one in every five days for playing golf. And if we count the playing hour of trump then we can find that Trump spent one-quarter of his total official days for playing golf.

Be ambitious like trump but never play golf like trump otherwise you have to suffer a great trouble.