Looking for a backyard game is this summer season to enjoy time with your family and friends? Ladder toss game can be a great solution in this regard. It is quite a simple game where you have to throw the bolas and acquire points.

Ladder toss game is an outdoor game, which is played with 1 or 2 game ladders depending on the type of game you are buying and 2 sets of bolas. This is typically an outdoor game. The game is not difficult to play or it doesn’t have any hard tough rules. You need two to six players to play the game.

It will require a ladder, bolas that is typically golf balls. The main objective of the game is to make bolas wrap the steps of the ladder. The ladder has three steps and the point of the game is decided by the steps. Each of these three steps has a different point value and the player or team having the most points wins the game 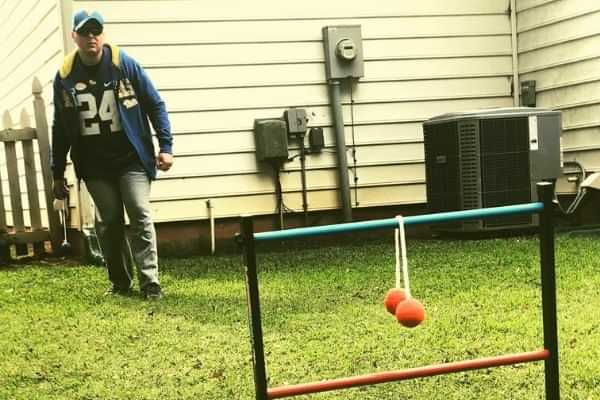 The requirement for playing ladder toss

Every sport needs some equipment to play the game. Without these things, you can’t think of even starting the game. As I have already mentioned in the above section that playing ladder toss is not a difficult game. This sentence also means that the game doesn’t require many things to start playing. But still, you need to gather a few pieces of equipment to start the game and enjoy it with your family and friends. Before going to the rules of this backyard game, let’s give you an idea of the requirements for playing this game.

Hearing the word ladder, you might be thinking it is only made for climbing up. Yes, certainly ladders are made for climbing up. However, ladders used in ladder toss games are bit different from conventional ladders. This ladder is not used for typical climbing. This is actually used to stick your bolas and make you score points, for great outdoor fun you need a perfect Ladder toss game set.

The ladder used in this game is short in size than conventional ladders and it has only three steps. Each of the steps has a different point value. The top step of the ladder has three points, the middle step has two points and the bottom of the last step of the ladders provides you only one point.

These ladders can be made of metal, wood, or plastic. Whatever the material is, it needs to be sturdy during the game. The player throws the bolas towards the ladder and if it is not enough sturdy, then you won’t find the expected amusement of the game.

I would recommend buying ladders made of wood, as it is not too tough to carry and also durable enough. But metal ladders are a bit harder to transport and plastic ladders won’t guarantee you sturdiness or durability during the game. Well, you need two ladders set up at each end of the field for each team.

: The next and the last thing you need to play ladder toss game is the bolas. Bolas is made by attaching two small size balls with a rope. These balls are typically like golf balls. In this game, the team must have three pieces of bolas. Remember of selecting two different colors of bolas for each team, unless it always creates chances of mixing them.

Each team has to throw three pieces of bolas by underarm throwing rules. As a player, you should always aim at the top step of the ladder to gain the highest points. The result of the game depends on the most points earned by a team.

How to play ladder toss game

You have already known what is ladder toss game, what is the requirement for playing this game. So now it’s time to discuss the rules of this game because without knowing the rules .pdf of a game you can’t properly begin it and enjoy it fully.

To start the game you first need to set up two ladders, which are of course different from conventional ladders on each end of the playing field.

The distance between upright ladders should be 15 feet. You can measure this by measuring tape.

You need a total of six pieces of bolas to start the game. Each team will have three and they will throw one at a time. All these bolas will be made of attaching two small size balls with a rope or string.

You have already set up the field and you are almost ready to start the game. But which team or player will go first throw the ball? Flip a coin and decide which team goes first.

The player throwing the bola has to keep himself behind the ladder unless the throw won’t be appropriate or would be called a foul.

A player can throw a bola at a time, he can’t think of throwing more than one at a time to earn more points quickly. Another team will get a chance of throwing their bolas after the first team has finished their throwing.

The scoring of this game seems pretty simple to me. The team or player having the most points at the end of the game is called the winner.

The ladder has three steps and each of these steps has three different types of points. The top step has three points, the middle step has two and the bottom step has one point. After all the bolas are thrown, the points will be counted and the referee will decide the winner.

There are two situations in the game, where teams will receive bonus points. One is when all the three bolas are placed are stuck in the same step and the other one is when one bola is stuck on each step. How much a team will get a bonus point needs to be decided at the starting of the game.

Typically the final score of the game is 21 points. If somehow it is a tie, then the game will continue until there is a difference of two points made between two teams.

So I think after reading this whole article, you are ready to enjoy the ladder toss game. You can share the rules of the game with your dear and near ones to make them understand the game and start having this backyard fun.