There are specific rules and regulations in any sports. So pickleball is not different in this case also. It has a few rules to make the game more fascinating. Rules like, serving, scoring, two bounce rules, faults, dead ball rules, non volley zone rules time out rules, line call rules are included in pickle ball.

Pickleball is the fastest growing popular sport in the USA. This game can be played in singles or doubles. Each player holds a solid paddle that is made of wood or composite materials and they have to hit the ball having 26 – 40 round holes, which is made of perforated polymer using the paddle in holding in their hand over. And they have to send the ball to the opposite side of the court over the net obviously. 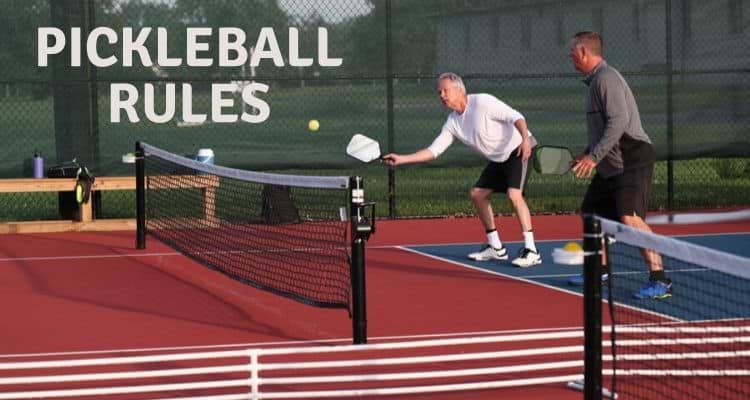 what is pickleball game

Pickleball is such a game sport that combines the elements from tennis, badminton and table tennis. This sport is mainly originated from badminton and so it has a lot of similarities with badminton. But you will also find this sport similar to tennis or table tennis in some sectors. That's why I would like to call this sport a composite type of sport.

Now let’s discuss about the rules that I mentioned above in details.

First decide which player is going to serve. This is typically decided by toss. The player holding the paddle in one hand and the ball in the other hand is ready to serve. The ball must be placed below the server's waist and must be kept underhand just before striking. The server must keep one of his feet behind the baseline while serving and can only return to the court when the ball is struck.

You only have one chance of serving the ball, wrong serve will provide the service chance to the opposite team or player. The ball must land diagonally in opposition's court. The first serve should be made from the right court, then the next serve should be made from the left court, and this sequence will continue until the team or player loses the serve. In a doubles game, when the first player loses the serve the second player from the team makes the serve from his correct side.

In tournaments, pickleball games are played for 15 or 21 points. But typically it is played for 11 points. Whatever the point is, the team reaching those points is declared the winner of the game. But there is an important thing to keep in mind that is, to win a game you have to reach the definite points with a gap of 2 points from the opposition.

Except for the time of volleying, you can enter into the non-volley zone. If your partner is in this zone and you are returning the ball then it shouldn't be called a fault. You can return a bounced ball standing inside the non-volley zone though.

If the serve or return of the service doesn't bounce before striking the ball, it is called a fault. Then hitting the ball into the net, under or between the net, hitting it out of bounds or violating any service rules can be declared as a fault. If you fail to return the ball before it bounces twice is going to be a fault. Then violation of non-volley zone rules is also in the category of faults.

After serving the ball, each side must take one groundstroke before volleying the ball and this is known as two bounce rule. It reduces the advantage of serving and volleying. After serving the receiving team and then the serving team must let the ball bounce once before returning it with the help of the paddle in hand.

The player or players of a team is allowed to have two-time outs in 11 and 15 points game. But in the case of 21 points, they have three times out opportunities. Players will have one minute of a break during each timeout and the referee will give a warning just before 15 seconds to end the timeout. There is no option of additional timeouts if the players are late in returning the court.

1.What are the 5 rules of pickleball?

The five rules of pickleball are serving, scoring, faults, non-volley zone rules and timeouts. These are the main 5 five rules that are used in the pickle ball game.

2. What are the serving rules in pickleball?

Having only one chance of serving, you have to place the ball below the waist and must keep underhand just before striking. You need to keep one of your feet behind the baseline while serving and can only return to the court when the ball is struck.

3. What is the double bounce rule?

After serving the ball, each side must take one groundstroke before volleying the ball and this is known as two bounce rule.