Is there anyone who hates GOT? Probably, there is no one. So what about playing your favorite TV series like a board game? You will own one of the seven kingdoms and may become the ruler of Westeros. Surely that's going to be a fun time for the Game of Thrones lovers.

And I'm here for those GOT fans with a review of the best Game of Thrones board games. I have listed the six best games and the list starts with A Game of Thrones Board game Second Edition. Just like the TV series, these board games will increase your excitement level as you progress. I have included a buying guide and don't miss the how to play section as this is a bit complex game to understand at first. 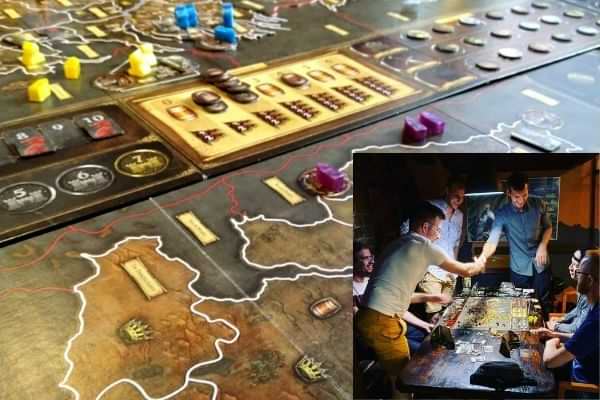 Best Game of Thrones Board

1. A Game of Thrones Board game Second Edition

Bring your favorite characters of Game of Thrones through this board game from Fantasy Flight Games. This second edition of the Game of Thrones board game features the death of Robert Baratheon and the lands of Westeros brace for battles. You have to fight the dominance of the realm to claim the iron throne. The game set includes welcome new enhancements like Tides of Battle cards and player screens. This updated version of the game incorporates with the elements of the past expansions.

The game set comes with a detailed board representing an accurate map of Westeros and figures shaped as footmen, knights, ships and siege engines display your military might to the realm. The game is playable between two to six players and it runs approximately for three hours, a long game for sure. The game progresses in ten rounds and after the end of these rounds, players with most castles or strongholds I declared the winner,

Fantasy Flight Games comes with the second edition of their longest-running living card game. The game features iconic characters like Eddard Stark, Robert Baratheon, Cersei Lannister, and Daenerys Targaryen and enter Westeros' continent through these Iconic characters. The game set comes with two distinct game modes that allow you to play a two-player joust or a multiplayer melee with up to six players.

You will find the same feeling of Game of Thrones as soon as you enter Westeros through one of these iconic characters. The game set comes with three different challenge types, which invite you to attack your opponents in three different ways. You can claim the iron throne's possession by defeating your opponents and gaining as much support as possible. In each round of the Game, players choose new plot cards to enact their overall strategies.

3. A Game of Thrones: Hand of the King Card Game

Who will be the hand of the king? With such a question rising in your mind, Fantasy Flight Games comes with another version of the Game of Thrones board game. It is a fast-paced game, unlike the other versions. The game runs for 15 to 30 minutes approximately. Minimum two players and a maximum of four players can participate in this gameplay.

Here in this game, each player has to manipulate Westeros' great houses to gain their support. This support will make the task of becoming the hand of the king easier for them. You can use the services of lord Varys to influence iconic characters because Lord Varys was a wicked man with a lot of intelligence. You will find the broker cunningly deals with your opponents to gain the upper hand. The player with the most influence at the end of the game becomes the king's next hand.

Fantasy Flight Games designed this fast-paced card game featuring HBO's famous TV series, Game of Thrones. Renowned game designer Reiner Knizia created this card game. You have to advance your great houses' position in the court through smart card play in the gameplay. So it quite clear that you have to use a bit of strategy to play this card game and win.

The cards included in the game set features photographs of the iconic characters from the TV series Game of Thrones. It offers you to take a look at your favorite characters from near. You have to interfere with your opponents in the game and race so that you can build a web of support before you get eliminated. Though it is a fast-paced game, it is playable between two to six players.

Fighting for the iron throne in the ultimate incident in Game of Thrones and Fantasy Flight Games has brought this edition of Game of Thrones to show how different characters fight for the cherished Iron Throne to rule the seven kingdoms. It is a board game of lies, diplomacy, battles and betrayal to sit on the iron throne. It features core mechanics from the well-loved and best-selling cosmic encounter.

Here in this game set, you can play as any of the five great houses in the Game, Stark, Lannister, Targaryen, Baratheon, or Tyrell. The Unique characters of the game come with the abilities that recall their portrayal on the show. The game set features fast and bloody actions and completes it with the ability to take hostages. Go forward than your opponents and claim the iron throne with your favorite character.

Play the 3D puzzle of Winterfell, a place from the game of thrones, with this game set from WREBBIT 3D. It comes with 910 easy to handle thick, snug, tight-fitting pieces. You need no glue to fit the parts. It is a challenging 3D puzzle game for Game of Thrones fans.

When the 3D puzzle is assembled, it measures 17.75 by 12.25 by 10.25 inches. The assembly instructions for this game set are included to make things a lot easier for you. The whole game set is made in Canada using unique foam backing technology that provides a sturdy design. Players over 14 years old are recommended to play this game.

Game of Thrones board game

Game of Thrones is a famous TV series telecasted on HBO. The series has mainly two sides. One is to fight against the white walker and save the people of seven great houses. And the other is to sit on the iron throne and rule the seven houses of Westeros. While watching this series, you might have thought for once to rule the seven kingdoms and fight against the white walkers.

The Game of Thrones board is created for guys like you. You will find House Stark, House Lannister, House Baratheon, House Grejoy, House Tyrell, House Targaryen and House Martell in the board game. Start the game with an owing one of this house and gain possession of several kingdom regions to claim the iron throne. The thrill you are missing with the end of the TV series can be brought back again by one of these Game of Thrones board games for sure.

Game version: There are several versions of the game of thrones board game you will find around while buying, like the king's hand, iron throne, the battle of the great houses, etc. But it depends on you which phase of this fantasy you want to play with. Choose that game version, which you dreamt of playing.

Large map: The map or the board is very crucial in this board game. It is typically a long-running game and you have to set up seven great houses on the board or the map. The game progresses on the map and up to six players can participate in the game. So undoubtedly, you need a large map for comfortable gameplay.

Iconic characters: The fun of the game increases when you can play as one of the iconic characters and fulfill their task, which was left incomplete somehow in real. Characters like Jon Snow, Daenerys Targaryen, Jaime Lannister, Cersei Lannister, Ned Stark, Robert Baratheon, etc., will enhance the fun and thrill of the game for the participants for sure.

Great houses: In Westeros, there are mainly seven great houses. They are House Stark, House Lannister, House Baratheon, House Grejoy, House Tyrell, House Targaryen and House Martell. You can't think of Westeros without them and how can you play the game without owning one of these houses? Start with one of these houses and gain support to claim the iron throne to win the game.

How to play the Game of Thrones board game

At the starting of the game, the rules might turn out to be complex for you. But as you progress in the game, you will find it easier. Let's know the basic rules of this game .pdf.

Start the game by setting up the map in the middle of the table. The map will indicate seven regions of Westeros and the object of the game is to gain possession of most areas or parts of Westeros to sit on the iron throne.

Each player will start with one great house or region of Westeros initially and try to make friends and defeat the enemies to gain more possession in the continent.

Players are participating in the game, place units on the board to show their owning land. They place house markers on the supply and three influence tracks.

Who will sit on the iron throne at the beginning of the game? The player with the highest house marker on the map will start as the seven kingdoms' ruler.

Take the cards included in the game set and make three decks of Westeros card by shuffling them. Keep them face down where each player can see them.

A deck of cards represents the wildings and also shows they are worthy of attacking or not.

You will find five order tokens in the game showing different actions. Move or attack order tokens tell you to move from one province to another. Defend cards makes your troop ready to defend against the region. You can support the defense or attack tokens by the support tokens. You can cancel the order in an opponent's adjacent province. Collecting some extra powers with power tokens.

The game ends as soon as any player grabs the seven kingdoms or strongholds' possession by influencing his opponents through his intelligence.

After watching the TV series, you might be dreaming of it, again and again, to play as your favorite character. Now make your dream true by buying a board game from the products mentioned above. Don't forget to read out the buying guide carefully before selecting one. And for easy setup and gameplay, I have included the game rules briefly also. So enjoy your time in Westeros.