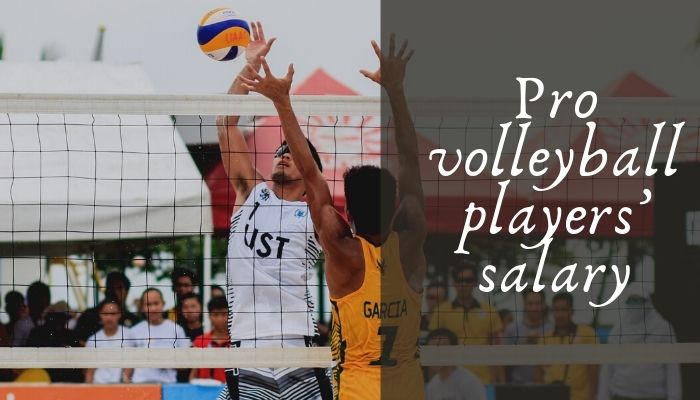 Pro-level players undoubtedly earn a lot than normal volleyball players. The salary of pro volleyball players ranges from $20,000 to $190,000 and it differs depending on the position they are playing, the club they play for, matches played in one whole season, and other extra earnings like sponsorship according to sportsscafe.

Average earning: I have already mentioned the average earning of pro players in volleyball per season. Although the range starts from $20,000, very few pro players earn that much money. The number is rather a lot bigger than this. On average, per seasonal earning goes up to $70,000.

However, when you add the earnings from other sources, the cost will rise again.

Average annual earning: On average, the annual earnings of a pro volleyball player ranges anywhere from $800,000 to $1,000,000. It is a combination of the base salary, whole seasonal earning, and also the extra source earnings.

What determinates Players’ annual earning: An athlete’s life is not an easy one to lead. Your physical and mental strength are simultaneously to be maintained. You have to know how to function even in your tough time and most importantly in your lucky time. The first and foremost thing to get a good paycheck is to win matches. We all know that. In the USA specially, volleyball players’ earnings are determined by the number of matches you won or you helped to win the team.

In Europe, it is more likely to be monthly basis salary. That is comparatively and usually lesser amounts than American players. But the bright side is you can focus on playing rather than winning. Also, if you are that much a good athlete then your monthly paycheck can be 10,000 dollars. Moreover, they get apartments, transportation facilities.In U.S also the winning prize money is another opportunity. For them, the big opportunities come when they participate in pro tour matches. The prize money is way bigger in these matches. It can goes up to USD 1 million! And, there is also secondary and tertiary prize money.

The factors that play behind this big prize money are the chair prices, number of audience attending the match and big sponsors. Also, winning these matches bring lots of high paying and good endorsements. These deals are quite lucrative.

In terms of salary pro female players are also not lagging behind the male players. Although the annual earnings of a pro-level female player can be as low as $400,000 and the highest can also go over $1,000,000 as well.

Likewise the male players, these annual earnings also include base earning, extra earnings, and seasonal earnings. On average, the salary of female volleyball players remains around $600,000 to $850,000.

Who is the highest-paid volleyball player

At present, Wilfredo Leon is the highest-paid volleyball player in the world. His net worth is approximately $1.4 million. But his exact salary has not been revealed. It is speculated between USD 5 million to 1.4 million. He is now at his younger age but earned a lot of fame and awards as a sign of his greatest performances. Although he is a Cuban, he is now living in Poland, and he plays for Zenit Kazan.

After knowing the average net worth or salary of volleyball players, you might be thinking of knowing the highest-paid players in volleyball at present. And that’s why the list is made for you.

Wilfredo Leon: He is currently the highest-paid volleyball player who earns around $1,140,000. This is also a speculation. It might be higher than the mentioned amount. He is a Cuban by born, but now also has Polish citizenship. He is a member of the Cuba national team. The worth he has already earned at this young age definitely sketches his bright future.

Earvin Ngapeth: He is a French volleyball player who earns around $1,350,000 annually. In 2015, he helped France to win the European Championship title. In 2017, he was adjourned as the most valuable player of the FIVB World League for the second time in his career. He also played for various clubs throughout his career. Earvin is one of those athletes who earns huge amount simultaneously from his salary and endorsements. Winning two world leagues gold medals made him totally worthy of these amounts. He is a man of great potentials.

Bartosz Kurek: He is a Polish player who also plays for a Turkish club. He earns around $1,100,000 annually. He participated in Olympic Games in both 2012 and 2016. He also won gold in European Volleyball Championship in 2009 and 2012 FIVB Volleyball World League.

Simon Robertlandy: He is a Cuban player who is regarded as one of the best blockers of this game in the world. Annually, this player earns around $967,000. He won an individual award at the 2009 World Grand Champions Cup, and the following year, he won silver in FIVB.

Dmitry Muserskiy: He is a Russian player who has a net worth of around $950,000. He participated in the 2012 Olympic Games and won the gold medal for Russia. The world saw him with his powerful spikes and blocks against Brazil in the final. He also showed his skills playing as a middle blocker and opposite spiker.

Aleksandar Atanasijevic: He is one of the best young spikers included in the list. He is a Serbian spiker, and his annual salary is around $920,000. He played for several clubs and also participated in the 2012 Olympic Games.

Gyorgy Grozer: He is a German player who earns around $870,000 annually. He has so far played for many clubs but yet to win a gold medal in Olympic Games. He holds a record of scoring a maximum of 39 points in the 2012 Olympic Games.

Matt Anderson: He is an American player who currently earns around $850,000 annually. This player is a part of Russian club Zenit Kazan since 2012 and helped the club win three consecutive gold of CEV Champions league and bagged 5 gold medals of Russian Champions.

Maxim Mikhaylov: He is a Russian player who has a current annual salary of around $714,000. He is currently playing for Zenit Kazan, Russia, and is also a Russian national team member. He was the best scorer and gold medalist in the 2012 Olympic Games.

Ivan Zaytsev: He is an Italian-Russian player who has an annual salary of around $620,000. He was born on October 2, 1988. While being in Italy, he won both silver and bronze medals in the European championship games. He began his career as a setter but turned into an outside hitter later on. He is now in Dinamo Moscow, a Russian club.

If you finding volleyball machine for batter hitting, serving, spiking see this article.

If you are a volleyball fan, you would love to know the top female volleyball players with higher net worth. Let’s go through a brief list of the 10 best female players’ salaries.

Gabrielle Reece: She is not only a volleyball player but also a sports announcer, model, and actress. She has annual earnings of $1,800,000.

Yekaterina Gamova: She is one of the tallest female volleyball players, and she earns around $1,400,000 annually.

Sheilla Castro: This Brazilian player won gold medals for the national team several times and earned around $1,160,000 per year.

Tatiana Kosheleva: This Russian spiker has won the award of most valuable player and currently earns around $1,000,000 annually.

Logan Tom: She is both an indoor and beach volleyball player who earns around $1,000,000 annually.

Jordan Larson: She is one of the most successful American women players and has a net worth of around $1,000,000.

Kim Yeon-Koung: She is one of the famous Korean female volleyball athletes. She has an annual salary of $800,000 approximately.

Carolina Costagrande: She is an Argentinean-Italian professional volleyball player who has a net worth of around $500,000.

Courtney Thompson: She is a former American female national volleyball team member and has an annual salary of $400,000 approximately.

After reading all these things above, it’s a kind of lame question to me. But if you want a direct answer, then volleyball players are rich indeed. Through the lucrative deals and endorsements around the world, these sportsmen are proved to be some of the richest sports professionals in the world.

Unlike football players or basketball players or golfers volleyball players do not get that much attention or mass level fames yet. But their professionalism, hard works and attitude are enough to give them a hefty amount of salary along with respect when they are full of achievements.

Now I think all you needed to know is included in the article and from the discussion, you have a clear idea about the salary of the volleyball players.