However, you can play this game differently by adding some more interesting ideas and you are going to get a lot of ideas here in this article. Also, I’m going to suggest to you a board game of the floor is lava. So stay with me without leaving here, if you are really interested. 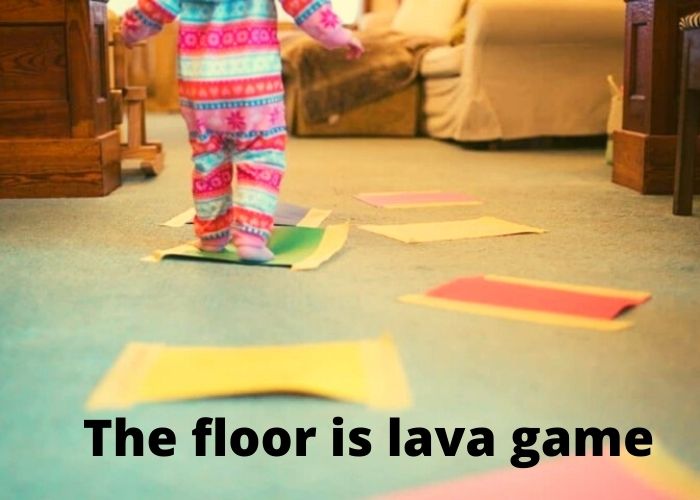 What is the floor is lava game

The floor is lava is an indoor and outdoor game, where you have to become the last standing person in the game or reach the destination before anyone, but you can’t touch the floor. In this game, it is supposed that the floor is full of lava and it is not safe anyway to land on the floor then.

You can play the game alone or with groups. It is a great game to bring your family together in the backyard or indoor by this game. Moreover, it is a great game for the kids to learn jumping, hopping, running, or even walking in some cases. You have to be quick and energetic to cross the destination without putting a foot on the floor.

Ideas about the floor is lava game

As I said earlier, you can add a few things in the basic the floor is lava game and bring a new amusement in the gameplay.

It is familiar to use a hot lava monster when you are playing the floor is lava game outside. From all the participants, one will become a hot lava monster and try to touch another participating player. This adds an extra fear in the players even if they are in safe positions.

Unless arranging the safe zones simply, you can create an obstacle on the way. These obstacles will make it difficult for the players to move from one point to another and they have more chances of landing on the lava.

Give tasks instead of elimination

According to the basic rules, when a player lands on the floor he gets eliminated as he is regarded as engulfed by lava. However, instead of eliminating someone, for this reason, you can give a task that must be completed by the player to stay in the game.

Use the furniture as safe spots

Using furniture as safe spots makes it even easier for the players to start the game. Instead of arranging paper sheets manually, skip the lava floor by moving through the furniture in your home.

In the outdoor games, you can put some wooden pillars, even trees on the way to pass the lava floor. This makes the task even more difficult for the players. In this case, they first have to land on a safe spot, and to move on to the next safe spot they have to go through a tree or wooden pillar.

Reach the destination by rope

You can cross the lava floor and reach the destination by ropes just like a Tarzan. It will not only provide you an extended amusement of the floor is lava game, but also give you an adventurous ride.

What is required to play floor is lava game

You don’t need many things to arrange and play the floor is lava game. If you have a bunch of participants, you can easily arrange the game both indoors and outdoors.

The paper sheets are regarded as the safe zones in the game. You can place them randomly on the floor and you can also make it difficult for the players to reach one sheet to another by keeping a long distance.

Tapes are basically used to attach the paper sheets on the floor securely. However, they are not used when you are playing the game outdoors.

Although I’m mentioning this thing in the list, it is not a must thing for the game. When you are playing the game outdoors, you can create safe zones by setting up different sizes and shapes of wooden pieces.

Another thing, which you can use in the game or not is the spinner. The board game of floor is lava includes a spinner. The spinner arrow sign shows on which color of safety paper piece, you need to land now.

A controller of the game

I think, for fair gameplay, you need a controller except for the participating players in the game. He will shout the different colors, watch the proceedings of the game and also decide the winner at the end of the game.

How to play the floor is lava game

The floor is lava is a pretty easy game to play with minimum playing rules. All ages of people from kids to adults can participate in the gameplay and have fun.

1. Before starting the gameplay, you need to choose one as the controller or a referee of the game. He will ensure fair gameplay throughout the game.

2. Then, take some colored paper sheets and arrange them on the floor randomly. These coloring pieces are the safe parts of the floor that is engulfed by lava.

3. Now the participants will stand at the starting line and wait for the referee to yell saying, the floor is lava.

4. The game will start as soon as there is shouting on the floor is lava.

5. Players will then randomly move on any of the safe paper sheets immediately, don’t land on the floor even by mistake.

6 .Now there are two ways to proceed in the game. One is by yelling the name of the color randomly by the referee or by spinning the spinner and yelling the color, where the arrow sign landed on.

7. All the players will then try to shift their positions to the yelled color as soon as they can.

8. After every yell, one sheet of paper will be removed and it will be the last moving player’s previously standing sheet.

9. Thus the game will continue, and it will come to an end when one reaches the destination or the player who is standing last.

10. However, never land on the floor during movement, unless you will be eliminated from the game.

You can add some educative value to the floor in lava game by adding alphabets or numbers on the safety sheets. The controller of the game will yell the number or the alphabet and the players will try to move to the yelled numbered or alphabet sheet as soon as possible.

Who is allowed to play floor is lava 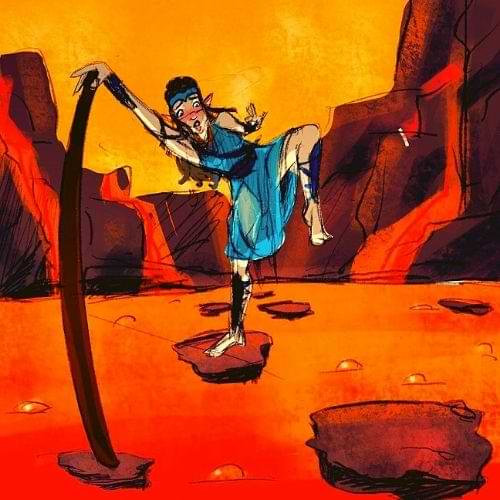 There is no standard age for participating in the floor is lava game. From kids of 5 years to 100 years older person are allowed to have the fun of this game. However, you need to set the difficulty level of the game keeping the age of the players in mind as well, because kids or older ones won’t be able to make the destination by crossing the same difficulty level as a younger one.

The floor is lava: A board game

The Floor is Lava - Interactive Game for Kids and Adults: You can improve your kids’ strength, endurance, balance stepping, conditioning, jumping, and leaping skills by letting them play the floor is lava game with this board game set. The game set includes 25 safety foam pieces in different colors. There are also 27 challenge cards and a spinner included in the game set. The manufacturer has added gameplay instruction for easy understanding of the game.

The game is playable between two to six players and anyone over 5 years is allowed to participate in the gameplay. The game starts with the spinner shouts saying, “The floor is lava” and by this, all the participants try to move on a random safety foam piece from the starting zone. Then he spins the spinner and the color, where the arrow lands on is called the safe color.

Each player then tries to move to that color pieces. The player, who moves last, will lose his/her previous safety foam piece as it will be taken off the ground. If any player lands on the floor, he/she will be eliminated. The last standing player will win the game.

Definitely, the floor is lava is a great game for the kids. It can improve their strength of walking, running; jumping and you can also add some educative value to the game for them.