Was the scene of Tom Hanks playing ping pong in one of his top-rated movies real? The simple answer is it wasn’t really completely and also not completely unreal. He did acquire some skills to move the paddle in the air like a pro, but the rest of the task depended on the CGI.

Spectators of that time might have thought the scene was indeed done, and credit went completely to Tom Hanks (Known as Forrest Gump in the movie). But as time went on, the reality came out, and half of the credit went to the computer graphics images. You also like to another interesting topic Bruce Lee playing ping pong with nunchucks. 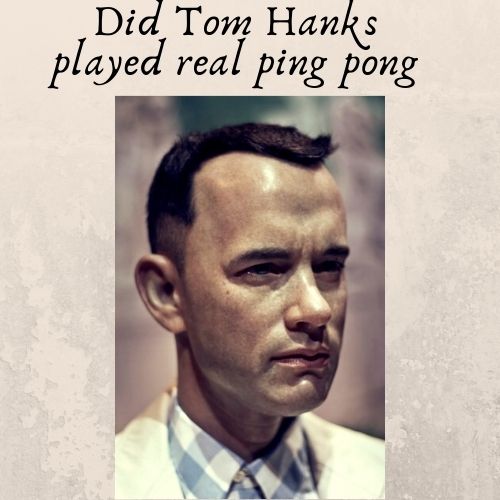 In 1994, Forrest Gump was released which is one of the top-ranked movies in IMDB with 8.8 points. In the movie, Tom Hanks played the role of Forrest Gump. Robert Zemeckis was the director of this famous American movie.

Eric Roth wrote the story of the movie based on Winston Groom’s novel in 1986. The movie earned a lot of appreciation for the story, humor, acting. One of the memorable scenes in the movie was Tom hanks playing ping pong in China.

He had to play the game and make the shots like a pro player in the scene, but for a person, without having proper skills it’s a tougher task.

Yes, he played and no, he didn't play. These are the two possible answers from the spectators of the movie you are supposed to receive. However, some facts provide the best answer to the question and also prove whether he played ping pong in Forrest Gump or not.

Skills of a ping pong player: High skills are required to play ping pong like a pro and for a normal guy, it’s almost impossible to acquire the skills so fast. The same thing happened in the Forrest Gump movie. The superb shots shown in the movie were real, but Tom Hanks didn’t master the shots.

He is an actor, not a stuntman: The risky or undoable actions in movies are done by the stuntmen. Tom Hanks isn’t a stuntman and also not supposed to do stunts like playing ping pong like a pro. But he also didn’t take any help from a pro player or any other to do the moves in the movie.

The moves shown in the movie performed by him with the ping pong paddle in hand were completely real. He just swatted the paddle in the air by keeping pace with the soundtrack of hitting the ball. His pure acting represented this match as a real ping pong match to movie lovers.

Both Tom Hanks and his opponent swatted the paddles in the air during the shooting to make it look real. Later on, a ping pong ball was added and the scene became one of the most loved scenes of the movie.

For this, the director relied on the CGI effects to add a ping pong ball after the stunt was done perfectly by Tom Hanks.

What paddle did Forrest Gump use?

The handle of the paddle had a red and gold gamma grip, which provided a textured, anti-slip gripping. During the auction for the paddle, the estimated range was $1,000 to $2,000. However, it was sold to an anonymous Forrest Gump lover for $25,600.

In the scene playing ping pong in Forrest Gump, Tom Hanks played ping pong against Valentine. It was a bit difficult for him to perform the ping pong playing stunts during the scenes without a ball as he had better skills in the sport. But to make the scene realistic, he did his job with efficiency.

As now you have known all the facts about the ping pong scene in Forrest Gump, you may not again ask whether Tom Hanks really played ping pong or not.