Both volleyball and basketball are better in few categories than the other one, and it also depends on the sports lover you are asking. Volleyball is a complex sport, which is harder to play and beginners would rather like playing basketball over volleyball.

So it’s a tough task to say which of these sports is better than another one, but we can still find the differences between these two popular sports. You should must know Why Basketball Is Better Than Soccer? 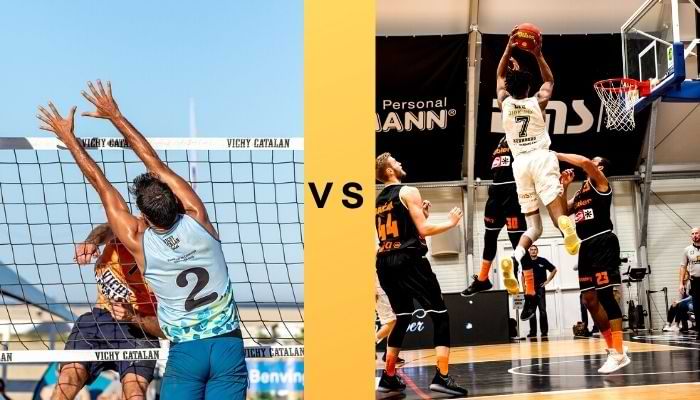 What is volleyball different from basketball?

Volleyball is different from basketball in many sectors, and by going through these one can understand the differences properly. The shooting, scoring, game duration, court, numbers of players, etc., are only some basic things that make these two sports different from each other.

Which is more popular: basketball or volleyball

Both these sports are popular in their field, but if you compare them now, I would rather go with volleyball in terms of popularity.

Teamwork: Both basketball and volleyball are team sports, but teamwork seems much vital in volleyball. Even if one player on your team performs poorly in volleyball, you are going to lose a point easily.

Hard to score: Compared to basketball, volleyball isn’t such a high-scoring sport. Also, scoring in volleyball is a tougher ask. This creates more enhancements among the spectators making it much popular.

Less physical contact: Players remain on their halves in volleyball, unlike basketball players. And they have their allotted positions for passing, setting, serving, blocking, and spiking. This produces the least physical contact even between the teammates. But players in basketball have to roam around the court, and physical contacts are noteworthy there.

Is volleyball harder than basketball?

Yes, volleyball is a bit harder than basketball, and there are some crucial reasons behind this.

Requires more skill: To dig, block, and hit the ball in only three contacts is a tough job, and that's why the game demands skilled players to perform well.

Quick response: To block the incoming hits from the opponent, you will only get a couple of seconds. The task is not done as you have to quickly pass the ball to one of your teammates.

Hard to score: High-scoring matches like basketball is not noticeable in volleyball because it is comparatively harder to score points here.

More strength needed: To score points, the spikes need to be powerful.

Duration of a volleyball and basketball match

Volleyball requires more time to finish a match than basketball. Let’s break into the details of the duration.

A basketball game runs for approximately 48 minutes if there isn’t any tie at the end of the match. There are 4 quarters in volleyball, which run for 10 to 12 minutes.

On the contrary, a volleyball game has 3 sets and the team winning 2 out of these 3 sets is the winner of the match. Each set approximately volleyball game duration 25 to 30 minutes and one team has to score 25 points by 2 points gap from the opposition.

All in all, to complete a volleyball game takes around 60 to 90 minutes.

Difference between the gameplay of volleyball & basketball

The gameplay seems much fair in volleyball than in basketball. The players stand on their half in the court, and both teams are divided by a net in the middle of the court. Volleyball doesn’t require running but needs to jump higher to spike the ball.

And one can improve spiking alone with the Best volleyball machine, which lets you practice alone as well. On the other hand, basketball needs continuous running with agility to take possession of the ball or even to go as near as possible to the hoop.

There are both inground and portable hoops available letting you score by getting the ball inside it. If you both sports lover you must chose Basketball shoes for volleyball for batter perform.

It’s tough to score points in both games, but spectators enjoy basketball games more than volleyball because of being a high-scoring sport.

In four quarters, a team can score more even up to 100 points that aren’t possible in a normal volleyball game. To the way of scoring, basketball players have to take possession of the ball, dribble, pass to their fellow player, and ultimately shoots it.

However, in volleyball, a player can score points by a powerful serve. Also, when the ball comes from the other side of the net, a player passes it the ball. Another player receives it and sets it for the spike.

Finally, the spiker spikes powerfully on the opposition's half into the ground. They have to score points in three contacts.

There are few basic skills required in both basketball and volleyball.

Running: This sport requires high running capacity and agility to take possession of the ball from the opposition.

Dribbling: After taking possession of the, you need to have the skill of dribbling it until finding the player to pass it for shooting.

Passing: Pass a fellow player of your team who is the closest one standing to the hoop. However, faulty passes can result in the loss of the ball’s possession.

Jumping: It doesn’t matter, whether you are standing near the hoop or far away from it, you have to jump to basket the ball.

Shooting: It is the last, but the most important one to score points in basketball. Great shooters can shoot the ball from a distance to score as many points as possible.

Serving: The server needs to serve the ball and send it to the opposition’s half over and without touching the net.

Passing: The non-serving team receives the ball accurately and passes the ball to another teammate.

Setting: The task of a setter is to set the received ball for the spiker to hit and send to the opposition’s end.

Spiking: Like shooting in basketball, spiking is the final task in volleyball. And the spiker does the job with powerful hits.

Blocking: Blocking is a defensive skill that back row players in volleyball need to acquire.

Digging: When a spiker hits the ball with the power to hit the ground, the defense specialist or libero does the work of digging to eliminate the scoring opportunity.

Although both these sports require jumping, basketball players are typically taller compared to volleyball players.

However, an average basketball player is 5 feet 9 inches tall. The net height is set 8 feet tall, and while spiking and blocking, the player’s hands go above the net. Also, a short player is required in the defensive position, especially as a libero.

A volleyball court is smaller compared to a basketball court and also has a different design.

A volleyball court is 59 feet long and 29.5 feet wide according to the official dimensions.

However, a basketball court is 91.9 feet long and 49.2 feet wide according to the official regulations. Meanwhile, NBA courts are 94 feet in length and 50 feet in width.

Balls used in basketball and volleyball

So, which one of these sports you like most? Hopefully, the whole article has already provided enough information to know the differences between these two popular sports.