Any kinds of sports are worth watching and when the sports name is basketball then the excitement is everywhere. But during a game, we may face trouble regarding some questions. What is triple-double in a basketball is such a question.

If you are here new to know about what is triple-double in basketball, then probably you are new in basketball. Not a big deal at all. We are here to make you understand. In general, there are five basic areas where you can score in basketball. These are points, rebounds, assists, steals, and blocks. If somehow you manage to score a double-digit in any three of these particular areas, then it is called a triple-double. Sounds good right?

If you would like to know more about triple-double then this article is obviously for you. 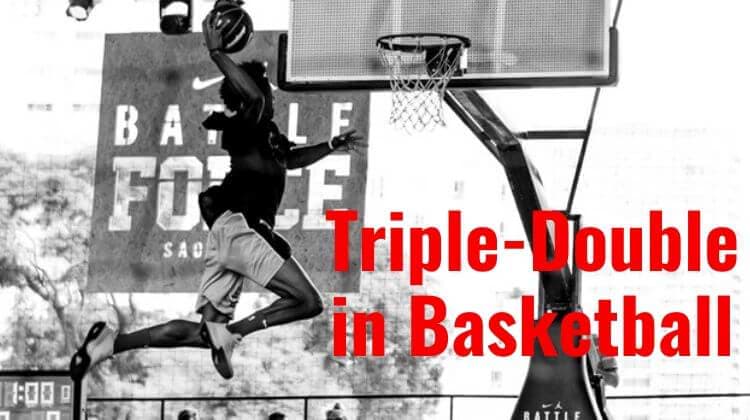 How to get a triple-double in basketball

It is basically when the referee has given you a free shot or free throw and you somehow have missed the ball to put it into the basket and any player from your team if manage to recollect the ball then it is known as rebounds. Rebounds give your team another opportunity to score a point.

Then comes Assist. Imagine you are playing basketball and at one point in the game you throw the ball to one of your partners and he manages to put the ball into the basket. That is what assistance is, so assist is in general when a player passes the ball towards another player of his team and the player who has received the ball has managed to put the ball into the basket. Assist strengthen the team spirit. Although it seems like you are not the scoring point then again it is your achievement. The total number of assist that you have made in a game will be counted on your profile.

In the end, the last statistical part is Block.so what is the block in basketball right? For understanding blocking better, you need to be a defensive player first. Imagine that the opponent team had thrown a ball into your basket and you stopped the ball. They have failed to score. You have saved three points. Sounds interesting? Then you should know that you have done a blockage here.

so blocking is actually when the offensive team had thrown the ball into your basket and you manage to stop the ball from going it into the basket without any kind violation of rules. That is, you should not touch the offensive player's hand or any parts of the body except only the ball. Blocking is, of course, a defensive attitude that paves the way for your team success.

In playing ground you should must know How To Shoot A Basketball, know this tips.

If you are very much serious about basketball and scoring triple-double then you can collect their clips and learn from the expert.

Youngest player to get a triple-double

Okay, here we are providing some more information that can inspire you to get a triple-double. Who knows, maybe you are going to be the next youngest triple-double player.

So, as far as now Markelle Fultz (Philadelphia 76ers)is known as the youngest player to score a triple-double. He achieved this achievement on April 11, 2018. He was playing against Milwaukee Bucks and in that match, he managed to get 13 points,10 rebounds, and 10 assists.

Inspiring right? I hope you will also score a triple-double one day. In pendamic time you also practice basket in your backyard or home, see our article portable basketabll hoop and electronic basketball arcade game.