Wiffle ball field derived from baseball and so the dimension of the field is pretty similar to baseball but in a shorter way. The foul poles of a Wiffle ball field measure somewhere from 85 to 105 feet from the home plate. 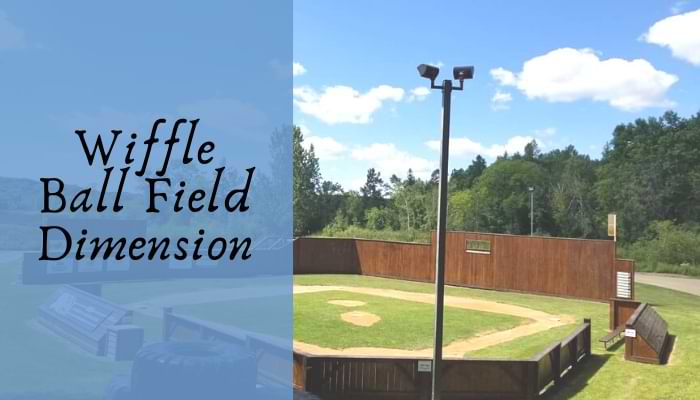 What are the dimensions of a Wiffle ball field?

While talking about the dimensions of a Wiffle ball field, there are actually a lot of things to discuss. A Wiffle ball field is divided into several sections and for an official Wiffleball, the field should meet the regulation size imposed by World Wiffle Ball Association.

The field Wiffle ball game is played on is divided into a few sections, and there are definite dimensions of these sections. When these sections meet the official rules and regulations of a Wiffle ball field, it is allowed to arrange official-grade, competitive matches as well.

Home plate: It’s the starting point of a Wiffle ball field and it’s the position where the batter stands to make his shots facing the pitcher’s ball. The field then expands into left and right corners with other sections included in it.

Dead zone: It is an arched area and is enclosed by left & right foul lines. It is also known as the bunt zone. The diameter of this dead zone ranges typically from 20 feet to 24 feet. The measurement of the dead zone’s radius is taken from the tip of the home plate.

In some rare cases, the diameter comes down to as low as 15 feet as well.

Pitcher mound: The player who throws a Wiffle ball curved to the batter is called the pitcher and the pitcher area should be near the single zone. It isn’t an easier task to pitch and curve a Wiffle ball from distance. So the distance between the batter and pitcher spot shouldn’t be much that makes the task even tougher.

Typically, the pitcher mound ranges from 35 feet to 42 feet. However, it can be as low as 30 feet as well according to the field dimensions.

Base distance: In a regulation-size Wiffle ball field, the base distance shouldn’t be less than 35 feet and more than 40 feet.

Foul zone: As there’s no bunting allowed in the Wiffle ball game, it is necessary to add foul zones to maintain the playability. The foul zone is measured from the home plate and it should no less than 5 feet and no more than 15 feet.

However, the foul lines in the Wiffle ball field should be at least 80 feet far from the home plate to the foul pole and the maximum distance should be 105 feet.

How high should the Wiffleball fence be

According to the official Wiffle ball field dimensions, it is necessary to have a fence lined up from one pole to another around the field. Other than a fence, sometimes it is also referred to as a wall. The height of the Wiffle ball fence shouldn’t be less than 4 feet and more than 16 feet.

How far the bases in Wiffleball

The distance between bases depends largely on the dimensions of the field. That is why bases in Wiffle ball game could stay far from as low as 30 feet and as high as 45 feet. A bigger field will have far distances than a smaller field, and it is a common calculation.

If you want to play wiffle balls you must need to a batter quality of wiffle ball bat.

What types of field is appropriate for Wiffleball

Wiffle balls is often regarded as a mini version of baseball because when you have a shortage of space you can rely on a Wiffle ball game to have a similar feeling to baseball. However, there is a noteworthy difference between baseball and Wiffle ball. It is the playing surface and one can enjoy a Wiffle ball on almost any surface.

It is playable both indoors and outdoors. Here are some common surfaces where you can arrange Wiffle ball games without any second thought.